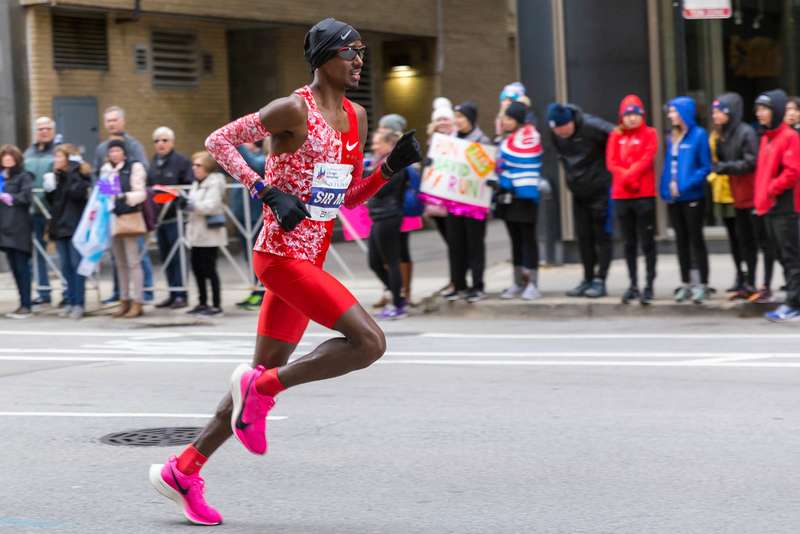 A documentary due to air this week by the BBC, will reveal how one of Britain’s most decorated athletes was shockingly smuggled into the UK as an illegal immigrant when he was just a young child, by human traffickers. Olympic hero Sir Mo Farah is held in high esteem in his adopted country, but he has now bravely opened up on the disturbing truth behind his arrival into the country, back in the early1990’s.

The Somalia-born superstar is estimated to have amassed a personal fortune in excess of $6 million, largely through prize money and endorsements, on the back of an illustrious long-distance running career. However, such opportunities and subsequent wealth would have been completely unimaginable in his early years when, he has now disclosed for the first time, he was forced to work as a domestic servant, at the tender age of just nine years old.

He has even revealed that Mo Farah is not his real name and that it is actually Hussein Abdi Kahin.

His remarkable story is bound to come as an enormous shock to his adoring fans, and could potentially have consequences with regards to the legality of his British citizenship. In the programme Sir Mo emotionally announced: “The truth is I’m not who you think I am, and now, whatever the cost, I need to tell my real story.”

His alarming account tells of how back at the height of the Somali Civil War in the late 1980’s, and when Mo was just four years old, his father, Abdi, was killed by shrapnel from a bazooka, while simply tending to his cattle at their farm. This contradicts what Mo had always stated in interviews, which was that he had come over to the UK as a refugee and was met by his father, when he initially arrived; but sadly the truth has more sinister overtones.

As things worsened in Somalia, his mother, Aisha, decided to sent Mo, and his brother Hassan, to live at their uncle’s home, in neighbouring Djibouti, on the horn of Africa, for their own safety. Mo divulged that after some time there he was told that he was being flown to Europe to live with relatives there, and that as a nine year old boy, he was really “excited” about the prospect of flying for the first time and what seemed as if it would be a great adventure. He recalled that a woman he had never met before, told him to say that his name was “Mohamed”, and that she had fake travel documents with her, which she used to give his identity as someone called: “Mohamed Farah.”

He was taken to a flat in Hounslow, West London, where for several years he was made to look after another woman’s younger children and do all the housework and chores. He had with him what he believed were the details of his “relatives”, but he agonizingly remembers: “Right in front of me, she ripped it up and put it in the bin. At that moment, I knew I was in trouble. She told me if I ever wanted to see my family again, and if I wanted food in my mouth, then I could not say anything to anyone. I was so unhappy, very often I would just lock myself in the bathroom and cry.”

After being denied for several years, he was reluctantly allowed to enrol into school at around the age of twelve, and initially he had a real struggle. At Feltham Community College, staff were led to believe Mo had recently arrived into the country as a refugee and they described him as an “emotionally and culturally alienated” child, unable to fit in to the school environment. However, it was his PE teacher, Alan Watkinson, who stepped into Mo’s corner, and was to play a massive part in turning things round for the bewildered and frightened young boy.

He noticed a transformation in Mo on the running track: “The only language he seemed to understand was the language of PE and sport,” he reminisced. Mo himself states: “sport was a lifeline and the only thing I could do to get away from the nightmare situation that I was stuck in where I was living was to get out and run.”

Over time a bond developed between the two of them and eventually Mo confided in his teacher about his true identity, his terrible background, and the awful family for which he was being forced to act as a modern day slave. Mr Watkinson was able, with the help of the social services, to get Mo re-homed and as luck would have it, fostered by a caring Somali family, with whom he would live happily for seven years. He also assisted him in applying for British citizenship, which was granted in July 2000.

His running went from strength to strength and of course phenomenal success would follow, with Olympic gold in both 5,000 and 10,000 metres at the 2012 and 2016 games. He was also able to replicate those achievements at the World Championships in 2013 and 2015, becoming only the second man ever to complete the “distance-double” and the first to ever defend both titles.

In making the film, Mo said he wanted the story telling so as to challenge public perceptions of trafficking and slavery. “I had no idea there was so many people who are going through exactly the same thing that I did. It just shows how lucky I was in how things turned out.” He added: “For years I just kept blocking it out, but you can only block it out for so long.” After 30 years, he says he wants to “feel normal” rather than “holding on to something”.

What transpires in the production and the reason for it remains unanswered, is that Mo was switched for another boy when he first came to the UK, and that boy is in actual fact the REAL Mo Farah; which is fittingly the title of the show. He had previously said he came to the country from Somalia with his parents as a refugee, something he had even written in his autobiography “Twin Ambitions”, but now feels able to disclose the truth, which is that his parents had never even been to the UK and that his mother and two brothers still live on their family farm, in the breakaway state of Somaliland, which is not internationally recognised, despite claiming independence back in 1991.

There are contributions from Barrister, Alan Briddock in the documentary and he is seen telling Mo that his nationality was technically “obtained by fraud or misrepresentations”. He does go on to say: “Basically, the definition of trafficking is transportation for exploitative purposes. In your case, you were obliged as a very small child yourself to look after small children and to be a domestic servant. And then you told the relevant authorities. All of those facts combine to lessen the risk that the Home Office will take away your nationality.”

Mo Farah was appointed Commander of the Order of the British Empire (CBE) in 2013 and then knighted to become Sir Mo Farah, by Queen Elizabeth II, in the 2017 New Year Honours list, for his services to athletics.

Recalling Sir Mo’s sporting triumphs, his trusted friend and former teacher Alan Watkinson said that when watching Mo at the 2012 Olympics, where he won his first “double” gold, he was overcome with emotion. “I was in bits, I was crying. I knew the story and it was just a crazy, ridiculous story that you couldn’t make up. The enormity of it was just difficult to comprehend.”

As for Sir Mo himself, he can’t help but be happy with the way his life worked out. “It just shows how lucky I was. So many moments in my life where it could have gone this way or that, but what really saved me, and what ultimately made me different, was that I could run.” Ironically, he has now found the courage and fortitude to stop running… from the truth.

The screening of “The real Mo Farah” will go out on BBC1 on Wednesday 13 th July at 9pm.