UK on amber alert as heatwave set to strike 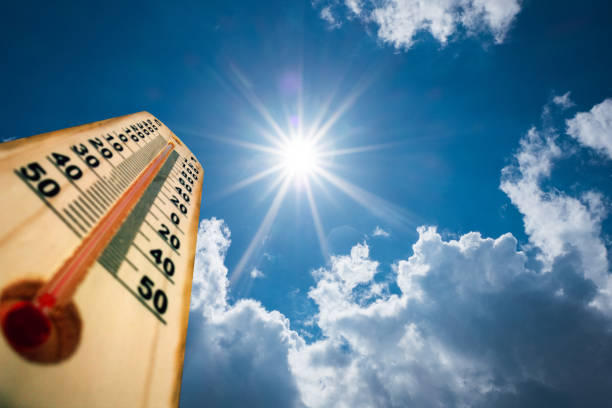 Various features of the UK’s geographic make-up, are responsible for the constant changes in the meteorological conditions that it experiences almost daily, with the Gulf stream often creating a far milder climate than should be the case, given its northern latitude. This leads to a British obsession, which is to be constantly talking about… the weather.

Well, those conversations are about to go into meltdown (literally) over the coming weekend and stretch into next week, as Britain gears itself up for a heatwave, that is threatening to bring record temperatures, widespread disruption, and potential loss of life. Extreme heat warnings are being announced in many regions, as the mercury is set to reach 35 Celsius, which is 95 Fahrenheit, and continue to rise even further, with a chance of creating new records.

What is the record?

The UK record temperature is 38.7 Celsius, which is 101.7 Fahrenheit, set at Cambridge Botanic Gardens in 2019, and forecasters believe there is a very good chance that as the extreme heat builds, the mercury could easily pass that mark sometime over the coming days. Even if that record is not broken, this years current high of 32.7 Celsius (90.86 Fahrenheit), recorded at Heathrow on June 17th, looks absolutely certain to be easily beaten, in areas all over the country.

How long is the heatwave expected to last?

The warning for the severe heat is in place from Sunday 17th July, until the end of Tuesday 19th July, with the hot spell expected to peak on Monday, or possibly Tuesday, in which case Wednesday 20th will also be an excessively high temperature. After that the very warm spell is set to last throughout the remainder of the week, and into the following weekend, with much of the southern, eastern and midland counties, having been placed on “amber alert.”

What is an amber warning?

It is rare for a Level 3, amber warning to be issued, but that is what much of England and Wales find themselves in, for the coming few days. It is brought in when there is a danger to life, or potential serious illness from the very hot temperatures. This alert requires health and social care workers to pay particular attention to high-risk groups of people such as: the elderly and vulnerable, plus people with serious or long-term illnesses, including heart or lung conditions, kidney disease, and diabetes.

Additionally, those who may find it difficult to keep cool, such as: babies and the very young, those with certain addictions, and the homeless. Media alerts will keep the public informed of any changes, particularly if there is any possibility of moving into Level 4, red alert, national emergency.

Once a decision is made to place the country into a Level 4 Red alert state, it basically would mean it had become a national emergency and the requirement would be for multiple agencies to become involved as rapid responders. This would only be declared “in the event of a severe, or prolonged heatwave affecting sectors other than health.” said a spokesperson for Downing Street, who refused to rule this out as a possibility, such is the serious concern that this heatwave is bringing.

What protective measures are being taken?

The London Mayor, Sadiq Khan, has triggered a severe weather emergency response in the capital, not something taken lightly and usually only ever brought in during the winter time. Welfare checks are to be carried out on the vulnerable and rough sleepers, with sunscreen and plenty of water being provided. Warnings are being issued relating to the dangers of trying to cool off in rivers and lakes, or indeed any type of waterway.

Encouragement is being given for folks to keep their blinds closed, or curtains shut, and ensure rooms are well ventilated. School children may be sent home if the classrooms become too uncomfortable and travel will also suffer due to temporary speed restrictions being introduced, in an effort to keep the trains running and mitigate possible track expansion, in the extreme heat. Unions across multiple industries are urging employers to relax dress codes and permit flexible working, to make use of cooler hours of the day.

The Met Office has issued a statement for much of England and Wales, warning: “Population-wide adverse health effects are likely to be experienced, not limited to those most vulnerable to extreme heat, leading to potential serious illness, or danger to life.” An elderly charity recommended that people seek medical assistance if anyone struggles for breath, even after resting, as extreme heat can aggravate heart and lung conditions. Many heart attacks and strokes are initiated by the strain of trying to keep the body temperature stable in hot weather.

Dr Michael Byrne, of the University of St Andrews, said: “Extreme heat is a severe threat to public health that the UK is woefully underprepared to deal with. We urgently need to overhaul UK infrastructure to keep us cool and healthy in a rapidly warming world.”

As the body warms, so the blood vessels open up. This leads to lower blood pressure and has the effect of making the heart work that much harder, in order to circulate the blood around the body. At the same time, sweating leads to the loss of fluids and salt and in combination, this adds up to potential heat exhaustion.

This debilitating condition has symptoms which can range from mild, to life-threatening. Sufferers may experience things like: tiredness, nausea, dizziness, headaches, muscle cramps, heavy sweating and confusion. Rehydration and body cooling are required as soon as possible at the first sign of any of these symptoms, that come as a direct result from over exposure to excessive heat.

What is the cause of the heatwave?

UK heatwaves are more often than not, a result of hot air masses from continental Europe and North Africa, and in this case it is a high pressure system referred to as the “Azores High”, which usually sits off Spain, but which has grown much larger and as a consequence, has been able to push further north, bringing much higher temperatures, not only to the UK, but also France and the Iberian Peninsula.

Coupled with this is a mass of hot air from the Sahara, and together they create one very warm front. The longer July days, with shorter nights allows the strength of the sun to build right up through the day, leading to sticky nights, and more of the same whilst the system remains in place.

This heatwave serves as a timely reminder of the accelerating impacts of human-induced global warming. The UK are actually getting off lightly compared to other European countries – especially Portugal and Spain – it is just that the British always appear to be least prepared for any weather extremes.