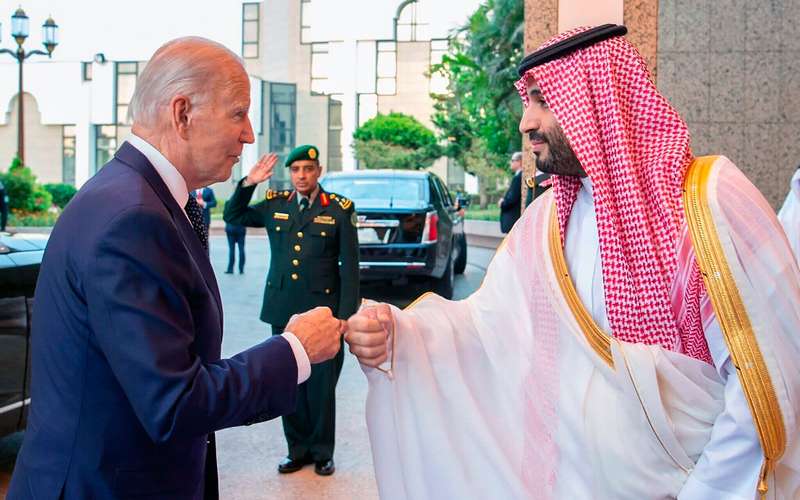 President Biden’s visit to West Asia has come and gone, but it is not without controversies. On top of the list of criticisms is the murder of Jamal Khashoggi. Critics believe that the U.S president has deviated from his initial promise to punish the Saudi leader for the murder of the Journalist.

Before Biden visited Saudi Arabia, Americans were hopeful that he would confront the Saudi Crown Prince, Mohammed Bill Salman, for his role in the murder of the former columnist of the Washington Post.

While addressing journalists after the meeting with MBS, President Biden said he raised the issue of the murdered journalist and was straightforward about it.

“With respect to the murder of Khashoggi, I raised it at the top of the meeting, making it clear what I thought of it at the time and what I think of it now,” Mr. Biden said after the meeting.

“I said very straightforwardly, ‘for an American president to be silent on an issue of human rights is inconsistent with who we are and who I am. I’ll always stand up for our values,” he added.

Mr. Biden said the crown prince denied being responsible for Khashoggi’s death. He said: “He basically said that he was not personally responsible for it,” Biden said of Mohammed Bill Salman’s response. “I indicated that I thought he was,” he added.

In October 2018, Khashoggi was assassinated by agents of the Saudi government in Turkey. According to the U.S intelligence report, the journalist was murdered on the order of the crown prince.

Biden was a strong critic of former President Trump’s handling of relations with Saudi Arabia. During the Presidential debate in 2019, the former vice president promised to punish Saudi leaders, including the Crown Prince, for the murder of Khashoggi after Trump failed to do so.

“Khashoggi was, in fact, murdered and dismembered, and I believe on the order of the crown prince,” Biden said at the presidential debate.  “I would make it very clear we were not going to, in fact, sell more weapons to them, we were going to, in fact, make them pay the price and make them the pariah that they are.”

“There’s very little social redeeming value in the present government in Saudi Arabia. They have to be held accountable,” he added.

BIDEN FACES CRITICISMS FOR FAILING TO KEEP TO HIS WORDS

President Biden has now come under criticism for failing to fulfill his campaign promise. Although he claimed to have talked about Khashoggi’s murder, it was obvious it was not his priority during the visit. He was more concerned about Saudi oil.

Khashoggi’s fiancée, Hatice Cengiz, wrote what her fiance would have said. She wrote: “Is this the accountability you promised for my murder? The blood of MBS’s next victim is on your hands,” she said on Twitter.

“The fist bump between President Biden and Mohammed bin Salman was worse than a handshake – it was shameful. It projected a level of intimacy and comfort that delivers to MBS the unwarranted redemption he has been desperately seeking,” Ryan said.

Many people are now interested in knowing what the President actually told MBS, as it was not clear how the conversation went.

While answering questions on PBS News, Adel al-Jubeir, the kingdom’s foreign affairs minister, has a slightly different version of the story to share. When asked if the president told MBS he was responsible for the murder, he said he did not hear that conversation.

“I didn’t hear that exchange, that particular exchange. What I heard is that the president talked about the importance of human rights to the United States,” Adel al-Jubeir said. “And that human rights are an issue that American Presidents attach great importance to even though sometimes they don’t live up to those ideals, which makes America humans like the rest of the world.”

The foreign minister stressed that any attempt by America to impose its values on other countries would fail. He added that it has happened in Afghanistan and Iraq.

He admitted that the issue of the murdered journalist was raised, and MBS admitted that it was a “terrible mistake.” Meanwhile, he said America had made mistakes too, suggesting that such errors were not peculiar to the Kingdom.

“His Royal Highness mentioned to the President that mistakes like this happen in other countries, and we saw a mistake like this being committed by the United States in Abu Ghraib ( Iraq),” Jubeir said.

There are indications that Biden’s motive for visiting the Kingdom was to negotiate an increased oil production with the kingdom to reduce the rising price of the product. Every other issue was secondary. President Biden said they had talks on global energy and adequate oil supplies.

“We had a good discussion on ensuring global energy security and adequate oil supplies to support global economic growth,” President Biden said. “I’m doing all I can to increase the supply for the United States of America, which I expect to happen. The Saudis share that urgency and based on our discussions today, I expect we’ll see further steps in the coming weeks.”

Responding to Biden’s remarks, Adel al-Jubeir told PBS News that the kingdom has already increased production in the last nine months. He added that the Saudi government does not have the monopoly to decide on increased oil production until there is an OPEC meeting.

“There will be an OPEC meeting on the 3rd of August… And decisions would be made in with regards to whether the market needs more crude or not. So it’s not a yes or no,” the foreign minister said.

The statements of President Biden and the responses from the Saudi Foreign Minister indicated a gap between the two nations, and the visit did not mend the cracks. While President Biden might have spent days in West Asia, there are indications that his travel yielded very little or no result. Maybe it attracted more criticism than positivity.