Wildfires spread across Europe as the continent battles heat wave 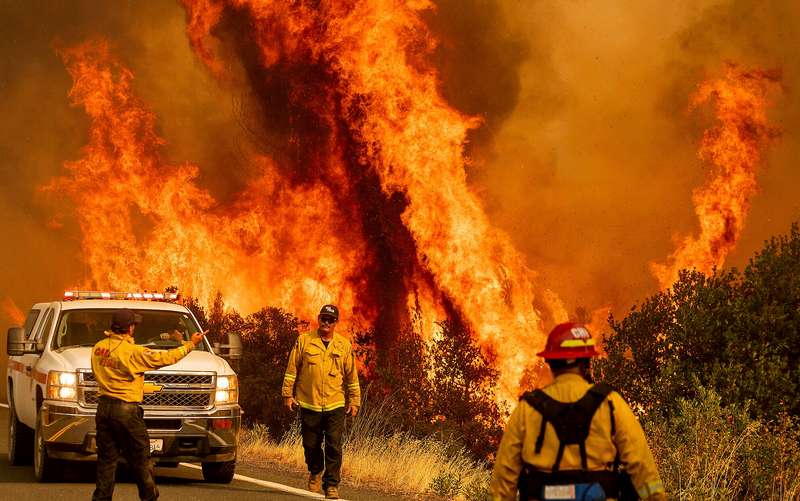 With a war in Ukraine, soaring gas prices, and the alarming inflation hitting Europe, it is right to say the continent is already having enough challenges. Unfortunately, in recent weeks, the entire continent has been gripped by a challenge it is unprepared for. European countries have experienced unprecedented heat in the past few days, with the UK breaking a record for its hottest day in history on Monday.

Most European countries are now scared of what will happen in the days ahead, as officials predict hotter days, more wildfires, and even droughts. Already, over one thousand people have died from the heatwave in Europe, and most of them are the elderly.

THE UK EXPERIENCED ITS HOTTEST DAY IN HISTORY

On Monday, the UK recorded one of its hottest days in history, with temperatures as high as 38.1C (100.6F). Despite the hot temperature recorded on Monday, forecasters and experts predicted hotter weather for Tuesday.

Penelope Endersby, the CEO of Met Office, told BBC radio on Monday that Tuesday is “expected to be hotter.”

“So it’s tomorrow that we’re really seeing the higher chance of 40 degrees and temperatures above that,” Endersby said. “Even possibly above that, 41 is not off the cards. We’ve even got some 43s in the model, but we’re hoping it won’t be as high as that.”

Already, there are wildfires in various parts of the UK because of the heatwave. While some schools closed early, others did not open for the day because of the situation.

Reacting to the wildfires in Britain, William, a British pensioner, told Reuters that authorities do not have the fire outbreaks under control and that he had to run for safety as the fire approached him.

“It was very fast… I didn’t take it too seriously. I thought they had it under control, and I was quite surprised when it seemed to be moving in our direction,” William said.

With the situation in the UK, there is an expectation that the Monday record would be broken and Tuesday could hold the record of the hottest day in the UK’s history.

24,000 PEOPLE FLEE THEIR HOMES IN FRANCE

The situation in France is no different from what is happening in the UK. The same Monday, most parts of France experienced their hottest days in history. According to the National Weather Office, the city of Nantes recorded up to 42C on Monday.

The BBC reported on Monday that Gironde, a popular tourist region in the southwest, has been hit particularly badly. Over 1700  firefighters have been deployed to handle the situation.  The fire in the area has destroyed up to 15,000 hectares of land in less than one week.

Jean-Luc Gleyze, the president of the Gironde region, has described the wildfires raging in the area as a monster, saying it is growing and growing on every side.

OVER 600 DEATHS IN PORTUGAL

On Thursday, Portugal recorded a temperature as high as 47C. It is the highest temperature the country has recorded in July. Authorities say more than 300 people from Murça municipality in Portugal have been relocated to other regions due to fire danger. Most of the country is now in danger of major fire outbreaks.

In 2017, more than 66 people died in wildfires. Authorities are now scared that the current heatwave might cause a repeat of that.

At least twenty-five fires are burning in different parts of Spain. These fires could continue for days as they are burning out of control. Although the heatwave was predicted to have ended on Monday, temperatures are relatively high in various parts of the country.

Just like other European countries, Spain also experienced several wildfires which firefighters have managed to bring under control. The country has also recorded dozens of death from the heatwave.

THE EU WARNS OF DROUGHT

In all of these, the European Union has warned of a major drought in Europe that would affect food production. “France, Romania, Spain, Portugal, and Italy will need to deal with this reduced crop yield. Germany, Poland, Hungary, Slovenia, and Croatia are also impacted,” the EU said in a statement on Monday.

The EU also said: “Drought emergency has been declared in five Italian regions and insufficient water availability has led to multiple use restrictions across municipalities. Similar measures to restrict water use have been taken in France.”

In the report released by the EU on the situation in Europe, it stressed that Spain and Portugal are “experiencing conditions conducive for wildfires.

“In Spain, volumes of water stored in reservoirs are currently 31% lower than the 10-year average. In Portugal, hydroelectric energy stored in water reservoirs is at half the average of the previous seven years. Both countries are experiencing conditions conducive to wildfires,” the report said.

Europe is unprepared for this disaster. The implication of this is that if the situation escalates, more wildfires will erupt and cause more damage. Fortunately, there are indications that the extreme weather might calm down in the coming days. Even if that happens, the effects of the heatwave might continue for months to come, as the predicted drought is unlikely to be averted.

It is time the world does more than hold meetings to discuss climate change. It is either an action is taken now, or someday, we all will watch the world burn down.