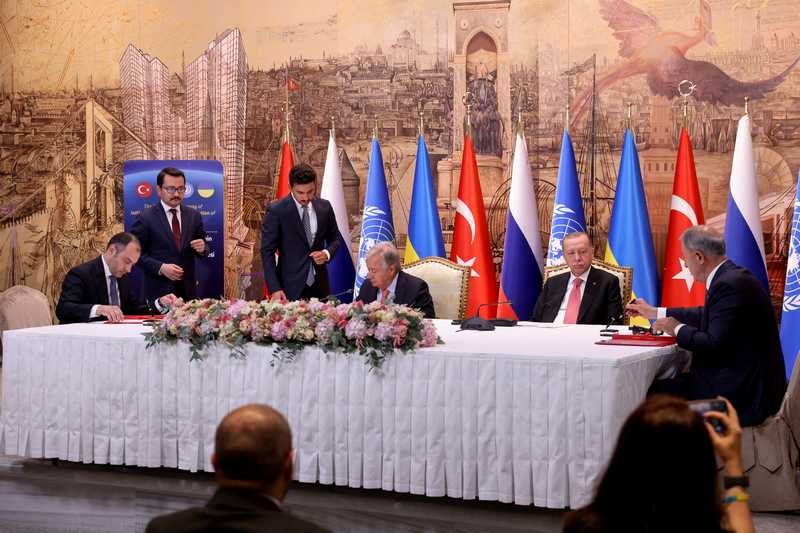 Since February 24, 2022, Russia and Ukraine have disagreed on every issue. However, in a surprise move on Friday, both nations finally agreed on something. A safe passage of grain to the world market.

As part of the deal that was mediated by the Turkish President, Tayyip Erdogan, and the UN, grains from Ukraine will now pass through a safe corridor in the black sea. Under the direction of Ukrainian pilots, the shipments would pass through the Bosphorus strait, a shipping corridor in North-West Turkey.  All the ships will be monitored by a Joint Coordinator Centre (JJC) at Instabul. The JJC consist of representatives from Turkey, Russia, and Ukraine.

Both Ukraine and Russia have agreed that there would be no attack on the ships carrying the grains. Russian forces will also monitor the vessels to prevent the smuggling of arms into Ukraine.

Meanwhile, before signing the deal, the Ukrainian government warned Russia, saying it would not tolerate any Russian official at its ports.

“No transport-escort by Russian ships and no presence of Russian representatives in our ports,” Mykhailo Podolyak said on Friday. “In case of provocations,[there will be] an immediate military response.”

The Ukrainian President’s chief of staff added that Ukraine was not signing a deal with Russia, but it was a deal between Ukraine and Turkey. The validity of the agreement will last for 120 days starting from the date of signing unless one of the parties terminates it.

The deal was signed by the Ukrainian Minister of Infrastructure, Oleksandr Kubrakov. After signing it, he described it as “a great support for the Ukrainian economy.” He added that it was Ukraine’s contribution to global food security and the world economy.

“Operating the seaports of Ukraine is our contribution to global food security and the world economy,  which would “slow the flywheel of inflation that has become a problem for the world,” Kubrakov said.

The minister added that the agreement between the two warring countries would encourage farmers in the country to sow ahead of next year.

DIFFICULT NEGOTIATIONS WITH AN EXPECTED END

The mediator of the deal, President Erdogan of Turkiye, said it would “relieve dangers of hunger” for billions of people.

“Millions of people will be relieved of this danger of hunger. In the coming days, we will see the start of ship traffic, and many countries will have a breath of fresh air,” the Turkish leader said. Erdogan added that despite the difficulty in the negotiation process, all parties reached an agreement. He said: “on all points, we have reached an agreement.”

Another person who was part of the negotiation process was the Secretary General of the UN, Antonio Guterres. He said in his remark that the negotiations “did not come easy” and “it has been a long road.” He described the deal as a “beacon of hope.”

Although the grain crisis has affected several parts of the world, farmers in Ukraine are the most affected. The Director of the Ukrainian grain traders union, Serhii Ivashchenko, said farmers in the country are now selling their grains at a loss because of the high cost of transporting the grains to European ports.

“Because now, when we transport grain through European ports, the cost of logistics is so high that it eats up not only the profits of farmers but also the cost of production,” Ivashchenko said. “Now Ukrainian farmers were forced to sell grain at a loss. And unblocking the ports will reduce the cost of logistics quite significantly.”

“Now a new harvest has started and we expect that the wheat harvest will be about 21 million tonnes. With such a harvest, we could export 13-15 million tonnes of wheat. Plus the harvest that we still had left,” Ivashchenko added.

Another farmer said the deal was necessary. Mykhailo Trokhymovych told CNN: “For us, it is absolutely necessary. Our warehouses and elevators are full of grain. The grain of the last harvest, the grain of this harvest.”

Despite the deal, other farmers believe their problem was not how to export the grains but how the war would stop. Most of them have complained about Russian bombings preventing them from going to their farms and destroying their crops. They want a stop to the war and not a corridor for exporting grains.