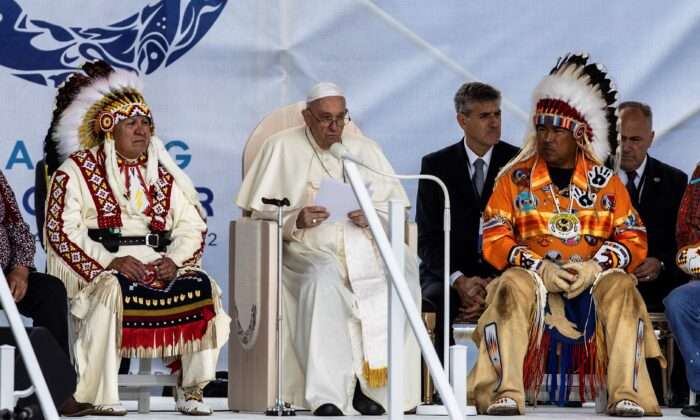 In the Catholic Church, members confess their sins to the priests. In return, the priests assure the sinner of God’s forgiveness. This week is quite different for the Church. The Head of the Catholic Church is currently in Canada for a one-week visit to seek the forgiveness of the indigenous people for atrocities committed by the Church in the 18th and 19th centuries.

The indigenous children were subjected to psychological, sexual, and physical abuse. The schools banned the students from speaking indigenous languages. The report of the TRC went as far as describing the events of the church as a “cultural genocide.” Sadly, thousands of children died in these schools, and some were even buried in unmarked graves.

The TRC recommended that the head of the Roman Catholic Church visit Canada and apologize on behalf of the church. The committee believes that a personal apology by the Pope would help to heal the traumatized survivors of the residential schools.

“We call upon the Pope to issue an apology to Survivors, their families, and communities for the Roman Catholic Church’s role in the spiritual, cultural, emotional, physical, and sexual abuse of First Nations, Inuit, and Métis children in Catholic-run residential schools. We call for that apology to be similar to the 2010 apology issued to Irish victims of abuse and to occur within one year of the issuing of this Report and to be delivered by the Pope in Canada,” the TRC report read.

Although the Pope had offered his apologies before now, he had respected the people’s wish by visiting Canada to deliver the apology.

“I am here because the first step of my penitential pilgrimage among you is that of again asking forgiveness, of telling you once more that I am deeply sorry,” Pope Francis told Indigenous leaders, residential school survivors, and others who were in attendance.

“What our Christian faith tells us is that this was a disastrous error incompatible with the gospel of Jesus Christ,” he said. He described the effects of the events as “catastrophic.” “I humbly beg forgiveness for the evil committed by so many Christians against the Indigenous peoples.”

Dr. Wilton Littlechild, a survivor of the residential school thanked the clergy for agreeing to visit the country.

“You have traveled a long way to be with us on our land and to walk with us on the path of reconciliation. For this, we honour you and extend to you our most heartfelt welcome,” Dr. Littlechild said.

The Pope’s visit has generated mixed reactions, especially among survivors of the atrocities. Some felt the apology by the Church was enough, while others believe it was either not enough or it came too late.

“Part of me is rejoiced, part of me is sad, part of me is numb. But I’m glad I lived long enough to have witnessed this apology,” Korkmaz Evelyn, a survivor of one of the residential schools in Ontario said. “But like I said, I want more because 50 years is too long to wait for an apology.”

“When I realized that he apologized, I started to cry,” Flora Northwest, another survivor of the residential schools said. “I thought, what made him change his mind? What made him make that apology? Why did it take so long?”

THE CALLS FOR FURTHER INVESTIGATIONS

While many have appreciated the Pope for his apology, others feel the best apology is a thorough investigation and the release of all the documents connected to the residential schools.

“I am a survivor myself. It is not easy for someone like myself to accept an apology when it’s not specific enough. We need action and we need continued support for ongoing healing,” Byron Joseph, chairman of the board of directors of the Indian Residential School Survivors Society, said in a statement.

“Understanding that survivors will each have their own vision of reconciliation, for many, anything less than an apology that includes an unqualified admission of the crimes committed, a full acceptance of responsibility, and a commitment to end the abuse and make full reparations will be just another empty apology and continuing injustice for First Nations, Inuit and Métis,” Pamela Palmater a professor in the University of Toronto wrote in Toronto Star.

THE PAINFUL STORIES OF SURVIVORS

The early years of a child play a great role in the kind of adult he would become. Most of the residential school survivors are still living with the trauma caused by the religious leaders who were supposed to care for them.

Most survivors have one thing in common. They were forced to abandon their language. That was the beginning of the“cultural genocide.” The goal was to coerce the children abandon their culture and adopt the general culture of Canada.

67-year-old Alsena White said the goal of the Church was “civilize the Indians by changing our language, changing our religion, changing us as Cree people.”

Flora Northwest also explained the kind of life she lived in the residential school. She explained how the priests and nuns ate the best of meals and leave very little for the “sinners” as the students were often referred.

“There were cows, there were pigs and big gardens. There were chickens, there were eggs. We didn’t get to eat all of that. It was always the priests and the nuns that would get the best and all the supervisors,” she says.

She added that the students learned to steal because the system was not fair to them.

“We learned how to steal food, and that was one of the things they taught us. They taught us: ‘Thou shall not steal. Well, if you don’t feed us, we’ll steal,” Flora continued.

Alsena previously noted, said she hated God because of these priests. She said she wondered if a wicked God could allow such evil to take place.

“I thought: ‘Why is there a real wicked God? Why a God that makes you feel terrible of being a native person, why is there a God that doesn’t care about your feelings at all?’” she said.