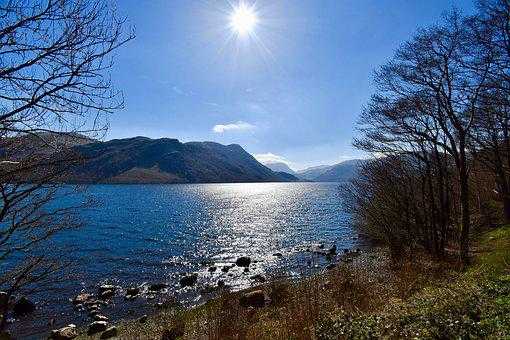 Strange goings-on are being reported from one of England’s most picturesque locations. Ullswater Lake, in The Lake District, Cumbria, is regarded by many as the most attractive of all the lakes in the National Park and attracts huge visitor numbers throughout the course of any given year. It seems however, that the serenity of these beautiful surroundings is not quite as it appears on the surface… literally!

Wayne Owens, a 61 year old local, who states that he has been coming to the lake for over 40 years for open water swimming and Triathlon events, has reported over Facebook witnessing some alarming and quite horrific sights involved the disappearance of large geese, seemingly dragged to their death by some mystery creature lurking beneath the calm waters, emerging from the murky depths.

In his post he warned: “Beware on Ullswater; I saw a full size goose taken off the top of the water and dragged underneath. I work on the lake and this was witnessed not just by me, but also by another person working on boat with me. This was the second one I have seen this year. Seriously this is NOT a joke.” He said the grey goose was approximately 12 pounds in weight and has been “dragged backwards, not to be seen again.”

He continued: “My skipper who has 36 years of experience was with me and said he had never seen anything like it, and was as shocked as me at what we witnessed.” He went onto advise people with dogs not to let them swim in the lake. “Do Not let your pet swim here, they might not return. In my opinion, and I have been coming here for 45 years and my boat skipper has been around here for not far off 40 years and we have never seen anything so shocking on these waters as that which we have recently witnessed. I do not believe it was a pike, it would need to be 60 pounds or more to be capable, and even then they would normally jump on top. Neither do I think it was an otter, the bird was far too big, no this was something much more sinister. Please be very careful; this truly is NOT a joke.”

Clearly shaken by the experience, Mr Owens concluded: “In my opinion, something has been released into the water and when I have spoken to people about it, they have said it could be a giant catfish, or even a crocodile. Some people think I’m mad but I have nothing to gain from this. It traumatised me. I want people to stay out of the water with their children, and I would like the Lake District National Park Authority to put some signs up warning people that there is something in the water.”

Christian Grammar, who has been skippering boats in Ullswater Lake for decades, said he’s never seen anything like it. He said: “The geese were sort of flapping their way across the water together, and one of them just suddenly disappeared. We all saw it and looked at each other as if to say, ‘Did you see that?’, then looked back and the other one went, literally just 10 to 20 seconds later. There was no disturbance on the water. I have never seen anything like it in all my time on here.”

Ullswater is the second largest lake in the Lake District National Park. It is seven and a half miles long, is on average three quarters of a mile wide, and has a maximum depth of 205 feet. It has three very distinct bends along its route, giving it a dog’s leg appearance and flanked by some eye-catching fells. The lake itself is a focal point of recreational activities, from sailing and boating to canoeing and windsurfing, plus of course swimming. There is also opportunities to simply cruise the waters on an old-fashioned pleasure steamer.

The lake is home to perch, brown trout, pike, char and an endangered and protected whitefish called a Schelly, which is a relic from the last ice age, and almost inevitably has prompted a few crazy theories more in keeping with the Jurassic franchise. Perch are actually the apex predator of Ullswater and are thought to be the reason why pike have failed to thrive. That said, pike are ambush hunters and will take small birds, ducklings, moorhens and other fish. Martin Fowlie, Media Manager for RSPB, said: ”Pike are predators, eating all manner of fish and amphibians. They also take young ducks and moorhens; bit only a really big pike would be able to attack and eat a bird as large as an adult goose.”

Other speculators were in agreement that the mystery underwater assailant would be either a pike, catfish, or large otter; although one local theorised that it perhaps was an unwanted exotic pet, such as a crocodile, irresponsibly discarded into the lake at a young age, and which had now become fully grown and was now wreaking havoc; but that does seem slightly fanciful.

“Pike are the sharks of freshwater. Many fisherman will tell you that swans, ducklings and many water birds fall victim to them, it is just nature.” was one locals take on the story; whilst another suggested it was more likely to be a large catfish: “You can get really big catfish. These fish will grow into very large specimens, especially in lakes. It’s their domain. They usually feed on frogs, mice, rats and small birds, but it is common all over the country in rivers and lakes, for large pike to take down bigger birds.”

However, wildlife expert Kevin O’Hara believes that the culprit will prove to be an otter: “When I first read it, I immediately thought otter, because I’ve seen them take anything up to a mute swan, so that was my first sort of initial thought. I would stand by that really, as a big dog otter is a very large animal, you know? You are looking at up to 25 pounds in weight. And they feed on waterfowl quite a lot, so that would be my guess.”

A spokeswoman for the Lake District National Park Authority said that its rangers hadn’t found anything particularly strange, after patrolling the lake. She stated: “We are aware of the alleged incidents involving geese on Ullswater. Our Lake Ranger team patrolled the area and did not see anything out of the ordinary. The Environment Agency is also aware.”

Of course this wouldn’t be the first time somebody had deliberately sparked a rumour, simply for some publicity, but with some apparently genuine first hand accounts to corroborate the story, there does appear to be something amiss here, albeit as of yet, unexplained.

Maybe the Loch Ness Monster has headed a little further south and fancied some… geese on toast!