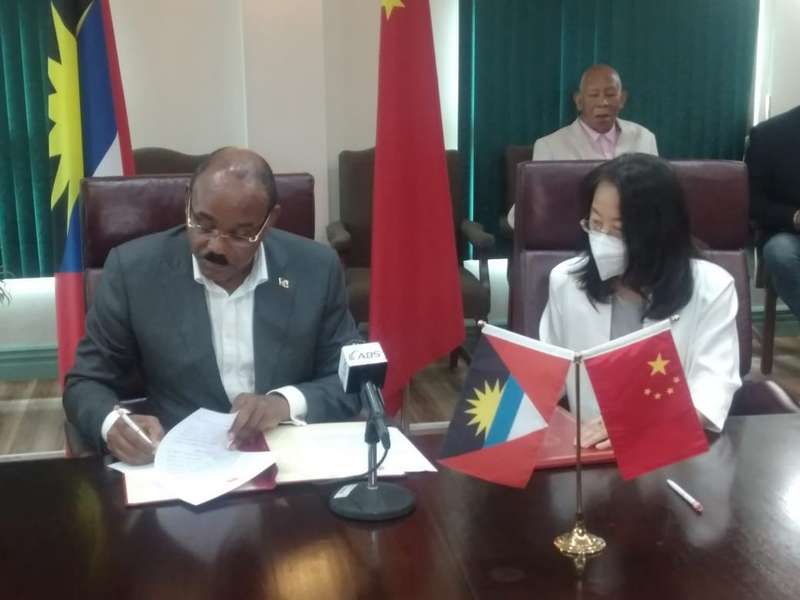 The governments of Antigua and Barbuda and the Republic of China have signed an agreement for the construction of 152 houses in Booby Alley in the Point area.

The papers were exchanged at the office of the prime minister, as part of the government’s housing revolution program.

Chinese Ambassador to Antigua and Barbuda Ambassador Zhang Yanling says the collaboration started three years ago but was interrupted by the Covid-19 pandemic.

“It started when both sides conducted many preliminary preparations but due to the pandemic, such efforts have been delayed. As the social and economic activities return to normal, we are so pleased we could continue the process. Today the signing is really a key step in this project forward,” Ambassador Zhang said.

She said the signing of the exchange of letters is another testimony between the two countries.

“We look forward to the joint efforts to ensure the effective completion of this project,” she said at the signing ceremony.

As part of the arrangements, the Ministry of Public Works is responsible for the preparation of the site at Booby Alley, including relocation.

Permanent Secretary in that Ministry Ambassador Clarence Pilgrim says the government will make sure that no resident will be displaced in the moving process.

“The reality is relocating persons from one area to another area can have challenges but we have embarked on that movement and we have 50 more residents who are ready to move. And by next week on Wednesday, we will have 46 of them ready to move. We have been sharing information with them. We want to make sure we are transparent and no one is disenfranchised,” Pilgrim said.

Pilgrim said discussions have been taking place with the legal affairs ministry, to ensure that all legal requirements are met and every resident who will be asked to move is fully compensated.

Meanwhile, Prime Minister Gaston Browne said this is the first phase of the housing project that will be expanded to other communities.

“We are hoping that within the coming months we can complete designs and soil testing and get the approval so we can start construction as soon as possible,” Browne added.

But PM Browne who is also the parliamentary representative for the Pointe community said that there are about 6 residents in that community who have been trying to stall the government’s project because they refuse to move.

“We will take them to court and move them out forcefully. We are not going to allow six misguided residents to stop a project that is going to empower the people of Booby Alley. I want to publicly ask those residents to cooperate. Having made this public appeal and they fail to cooperate, they will have to face the law and we will move them forcefully,” Browne added.

The 900 square feet homes will cost in the region of two hundred and fifty thousand dollars.