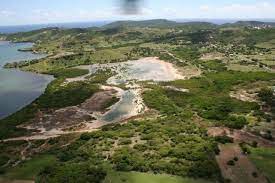 About ten local investors have expressed keen interest in investing in a major project earmarked for Willoughby Bay in Antigua and Barbuda, according to Ambassador Daven Joseph; who spearheads the project.

He told reporters on Monday that while these investors are willing and able, they are concerned about the infrastructure around the project.

“We need to build out the infrastructure because this is one of the issues that are of great concern to potential investors. They want to ensure that we have a good infrastructure development component so that the value of their properties will be commensurate with the environment,” he said.

To facilitate the move, a Willoughby Bay Infrastructure Development Program, which Joseph said will include securing funds through a special CIP offering already approved by the Cabinet.

The Willoughby Bay project is being spearheaded by the government of Antigua and Barbuda.

They announced plans for the project back in 2020, with the intention to boost the economy when the Covid pandemic was first announced.

The project, announced in May 2020, is being spearheaded by a government-led committee and was intended to boost the economy during the peak of the Covid pandemic.

It was also geared at empowering residents to own a piece of “the rock”.

The government has said that residents in the communities of St Phillips, Newfield, Bethesda, and the general Willoughby Bay area will receive first preference for the land development.

The entire initiative that is costing about $300M.