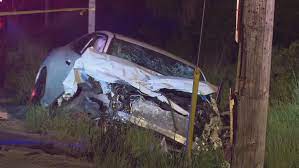 A car crash in Dominica Friday has claimed the life of a married couple, leaving another man nursing serious injuries at the Intensive Care Unit

According to police in that country, the collision happened in a community called Dublanc in the north of the island.

Acting Inspector of Police, Fixton Henderson, said a Honda Civic driven by 92-year-old Authur Thomas ran off the road and collided with a cliff on the eastern side of the Morne Espangol road.

“The occupants were 68-year-old Jean Lloyd Thomas, wife of Arthur Thomas and 72-year-old Oliver Marie, of Barbados who also resided at 12th Street Canefield. The occupants of the vehicle were transported to the Reginald Armour Hospital in Portsmouth,” Henderson said

Arthur Thomas and his wife, Jean Lloyd Thomas, were examined and pronounced dead by a medical doctor and their bodies are being kept at a funeral home awaiting a post-mortem.

“Oliver Marie was transported to the Dominica China Friendship Hospital in a stable condition where he is receiving medical attention,” Henderson reported.

The vehicle which contained two other occupants was extensively damaged.