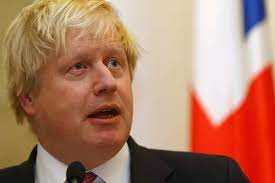 In front of a large crowd gathered outside Number Ten Downing Street this morning, outgoing Prime Minister Boris Johnson urged fellow Conservatives to get behind his successor Liz Truss, as well as comically comparing himself to a Roman statesman and a booster rocket, during his farewell valedictory speech to the nation, which lasted just over seven minutes, delivered in his usual upbeat manner.

Within minutes he was whisked away to catch a flight to Balmoral Castle in Scotland, where he will tender his resignation to Her Majesty Queen Elizabeth II, who will then formally appoint Liz Truss as his successor.

Mr Johnson began his address by thanking people for attending at a very early time of the morning (it began shortly after 7:30 a.m.), before initially having a veiled dig at those who had forced his hand to quit, a couple of months ago.

He said: “Thank you for coming out so early. Well this is it folks!” With bursts of applause greeting him he continued: “The torch has been passed to a new Conservative leader; the baton has been handed over in what has unexpectedly turned out to be a relay race – they changed the rules half way through, but never mind that now.”

Having got that message across, he went on to list some of the achievements in his near three year term, in his own expressive way to say: “We got Brexit done. We were the people who delivered the fastest vaccine role out in Europe, with 70 per cent of the country receiving a dosage within the opening six month period.”

Help for Ukraine and defying Putin

To an occasional spattering of applause, he reminded the watching audience about: “The prompt early weapons provided to Ukraine and their heroic armed forces, which may just have helped shift the balance and course of the biggest European war in 80 years.” He stressed how the party had acted with speed and urgency to get the economy moving again after Covid, despite the opposition.

To loud cheers he was clear that the country would have enough economic strength to get through the current energy crisis, and would not be browbeat by Putin’s “vicious” warring actions.  “If Putin thinks he can win by blackmailing and bullying the British public, then he is utterly deluded.”

With many friends and supporters giving him encouragement, Mr Johnson then turned his attention to accomplishments in his time in office. “We have delivered on huge manifesto commitments. We have made our streets safer, with more police officers. There are more hospitals and we have put record funding into schools. There are colossal transport plans in place and the private sector investment is flooding in.”

Continuing he said: “Unemployment is now down to a level not seen since I was about 10 years old and bouncing around on a space hopper.” He then took that opportunity to use that statement as a lead into a couple of ‘typical Boris’ type quotes. “On the subject of bouncing around in future careers, let me say that I am now like one of those booster rockets which has fulfilled its function and will now be gently re-entering the atmosphere, before splashing down invisibly, in some remote and obscure corner of the pacific ocean.” He then added somewhat bizarrely and to audible laughter: “Just like Cincinnatus, I am returning to my plough!”

Cincinnatus was a Roman statesman and military leader who became a legendary figure of Roman virtue when he battled against an invasion and achieved a swift victory in a very quick timespan, before relinquishing power and returning to work on his farm. Who else but Boris Johnson could have made that connection?

Then, with a serious tone, he offered his backing to the new regime. “I shall be offering my most fervent support to new government and I want to say to my fellow Conservatives, that this is the time for politics to be over folks. We must deliver for people of this country; it is what they want; it is what they need; and it is what they deserve.”

Strength of the UK

Beginning to wind down towards his finish, he went on to say: “I am very proud to have discharged the promises I made when you all were kind enough to choose me to lead this country of ours. We can speak with clarity and authority and we are one whole and entire United Kingdom. Our security and armed forces are globally admired, and our Union is so strong; those who want to break it up will no doubt keep trying, but they will never succeed.”

Thanks to the people

Then wrapping up he concluded: “Thank you to everyone who has looked after me and my family over the past three years, including Dillon – the dog! If he and Larry (the Downing Street cat) can put behind them their occasional difficulties, then so too can the Conservative party. Above all, I want to say a massive thank you to all of the British people, the voters, for giving me the chance to serve you.”

His final words were: “Together we have laid foundations that will stand the test of time. We have put in vital new infrastructure; great solid masonry on which we continue to build together. Paving the path of prosperity, both now and for generations to come, and I will be supporting Liz and her new government every step of the way. Thank you and goodbye.”

Mr Johnson has not actually said, not publicly anyway, what his intentions are once he has officially left office. There is however, speculation that he will remain as an MP for his Uxbridge and South Ruislip constituency. As for further down the line, it would definitely not be a surprise to see him run for the top job once more in the years to come.

There is a sense that he believes there is still some unfinished business to attend to, and his removal before what he sees as his time, will irritate and niggle at him for a considerable period into the future.