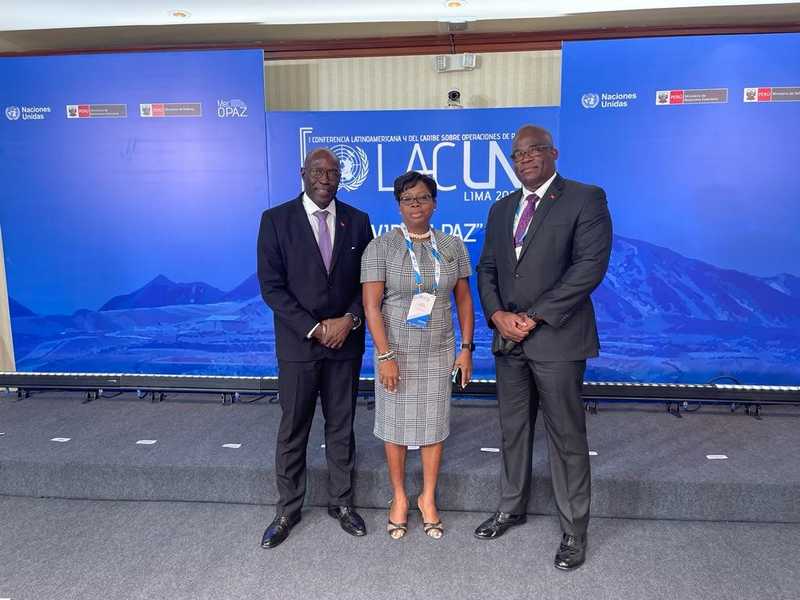 ​The Permanent Secretary in the Ministry of Public Safety and Labour, Stacey Gregg-Paige, has described as informative and timely, a conference on UN Peace Operations in Lima, Peru.

Peru led a high-profile team to the first Latin American and Caribbean Conference that saw representatives from several Government, Military, and Police organizations from Latin America and the Caribbean.

They discussed topics related to UN Peace Keeping Operations and the Role of Latin America and the Caribbean.

“We embrace the engagement on the development of our personnel as one that will allow for our effective participation in any future UN peacekeeping operation. It is indeed a timely opportunity to identify

Some of the topics include the establishment of a Regional Cooperation Network in the Field of Peace Operations and Lessons Learned in Training and Education in Preparation for Peace Keeping Operations. As a small nation, all citizens are expected to play a role in national development and this expectation extends to national security,” she said.

Some of the other topics discussed include the establishment of a Regional Cooperation Network in the Field of Peace Operations; Lessons Learned in Training and Education in Preparation for Peace Keeping Operations; Women, Peace and Security; Gender Approach on Peacekeeping Operations, and the Development of Science and Technology and Environmental Care; Challenges and a Vision Forward, among several others.
Also accompanying the Permanent Secretary at the conference is the Chief of Defense Staff Col. Telbert Benjamin and Commissioner of Police, Mr. Atlee Rodney.

Colonel Benjamin said the event and the intended creation of a network of interest presents an opportunity for ABDF and the Police Force to make a more tangible contribution to hemispheric and global security, in line with our country’s national interests and within our limitations.
Antigua and Barbuda’s Commissioner Atlee Rodney also echoed similar sentiments by saying.

“This is a great opportunity for Antigua and Barbuda to place itself in a good position to fulfill its global obligations in the area of UN Peace Keeping Operations.” He also stated, “The networking with security officials from Latin America is quite beneficial to Antigua and Barbuda.”
Meanwhile, the President of Peru Mr. Pedro Castillo highlighted the importance of regional cooperation and collaboration in addressing regional and international conflicts.

He stressed that Latin America and the Caribbean have a vital role to play in global peace and UN Peace Keeping Operations.