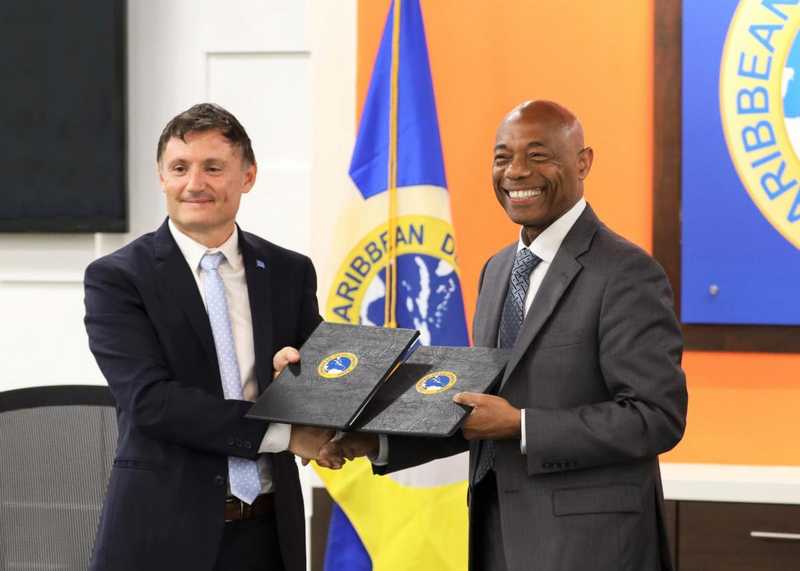 On Wednesday, the United Nations (UN) and the Caribbean Development Bank (CDB) signed an agreement to further strengthen ties and deepen the partnership between the two institutions.
The agreement, according to reports from Bridgetown Barbados, outlines cooperation in four critical areas for the region, namely economic diversification, innovative finance, resilience and vulnerability and data and knowledge management.

CDB President, Dr Hyginus “Gene” Leon, who spoke on the occasion expressed a need for stronger collaboration among development agencies.

“The rationale for partnerships is not that we need to collaborate, the rationale is simply that none of us on our own can overcome the task ahead and if we are committed to making a change there is no other choice but to partner,” he stated.

Also speaking at the event was UN Resident Coordinator for Barbados and the Eastern Caribbean, Mr Didier Trebucq who was pleased that both agencies were now formalising a commitment to partner more closely to achieve the Sustainable Development Goals (SDGs), adding that “With only eight years to achieve the SDGs, in the context of multiple layers of crisis, we know that it will be challenging and more will be required of us, as development partners it is clear that we can only make progress by working together.”

The coordinated efforts addressed by the letter of intent signed by CDB’s President and the UN Resident Coordinator will translate the broader commitments of both entities and allow the redirection of the development trajectory of the Caribbean, in alignment with national and regional priorities.

Mr Roberto Valent, UN Regional Director for the UN Development Coordination Office in Latin America and the Caribbean also spoke at the signing ceremony. He confirmed the UN´s commitment to the partnership and highlighted that the agreement allows the agencies to work with even greater focus and efficiency.
“Our common agenda makes it very clear that partnerships and the drive of multilateralism is part of the solution,” he stated

The letter of intent will formalise the Bank’s relationship with the UN and focus on key areas for development. Priority sub-sectors highlighted under the new agreement are digitisation; the blue economy; regional trade and support for MSMEs; innovative and financing, aligning the financial flows to the region with the 2030 agenda; building resilience and addressing vulnerabilities, and data and knowledge generation.

Both CDB and the UN are leading institutions supporting the achievement of the SDGs. The UN and CDB are currently seeking to increase finance to fund the region’s development through novel solutions and new partnerships to close the existing gaps to the SDGs and further accelerate sustainable development.