The new line of succession to the throne 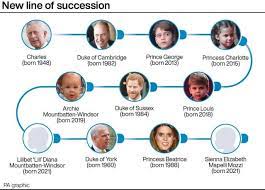 Following the sad death of Queen Elizabeth II on Thursday 8 September at Balmoral Castle, after reigning for a record 70 years as a British monarch, her eldest son Charles has stepped up to become King, to be known going forward as King Charles III. This act obviously changes the structure of succession below him, with his eldest son William, now assuming the position of first in line.

In 2013, a law called the Succession to the Crown Act ended the centuries-old practice of a younger son superseding an elder daughter in the line of succession. The act, which applies to royals born after October 28, 2011, also ended the provisions by which those who marry Roman Catholics are disqualified from the line of succession. The changes came into full effect in March 2015.

The new hierarchy, now has more children than adults making up the top eight positions.

Prince William is the elder son of King Charles III and Diana, Princess of Wales. He was just 15 when his mother died in a tragic car crash in Paris in 1997. He went on to study at St Andrews University, where he met his future wife, Catherine (Kate) Middleton. The couple were married in 2011.

The Prince trained with the Army, Royal Navy and RAF, before spending three years as an RAF search-and-rescue pilot with RAF Valley, on Anglesey, north Wales. He also worked part-time for two years as a co-pilot with the East Anglian Air Ambulance, alongside his regular royal duties.

He left the role in July 2017 to take on more royal duties on behalf of the Queen and Duke of Edinburgh. William has inherited his father’s Duchy of Cornwall and is now the Prince of Wales. Catherine is now the Princess of Wales. As heir to the throne, his main duties are to support the King in his royal commitments.

Prince George of Wales was born on 22 July 2013, at St Mary’s Hospital in London, the first child of William and Kate. He now is elevated to second in line, after his father.

Kate, the Princess of Wales gave birth to her second child, Charlotte Elizabeth Diana, on 2 May 2015, again at St Mary’s Hospital. After the change detailed above, she is now third in line to the throne, behind her her father and older brother, and is known as Her Royal Highness Princess Charlotte of Wales.

Once again St Mary’s Hospital was the location for the birth of the third child to William and Kate. Ironically, born on 23 April 2018 (St George’s Day) and he sits behind his big brother, George, and father, as well as big sister now, following the law change.

Prince Harry trained at the Royal Military Academy Sandhurst and went on to become a lieutenant in the Army, serving as a helicopter pilot. During his 10 years in the armed forces, he saw active service in Afghanistan twice, in 2012 and 2013 as an Apache helicopter co-pilot and gunner.

He left the Army in 2015 and stepped back from royal work following his marriage to US actress Meghan Markle. He has since moved to the United States, and has split the opinions of the British public, with many voicing their disappointment at what has been seen turning his back on his family and country.

Prince Harry and Meghan’s first child, Archie Harrison Mountbatten-Windsor, was born on 6 May 2019. By naming him as they did, the couple chose not to use a title for their first born.

Their second child was born in Santa Barbara, California, on 4 June 2021. Lilibet Diana Mountbatten-Windsor will be known as Lili, but is actually named after the Royal Family’s nickname for the Queen. She was given the middle name Diana in honour of Prince Harry’s mother, just as his brother William had done for his first daughter.

Prince Andrew, is now eighth in line to the throne. He is the third child of the Queen and Duke of Edinburgh, and was the first to be born to a reigning monarch for 103 years. He has two daughters with Sarah Ferguson, who he married in 1986, but divorced ten years later. The Duke served for 22 years in the Royal Navy and saw active service in the Falklands War in 1982.

His recent life has been clouded in controversy and has had to step away from royal duties since 2019 after his involvement in a sex-trafficking scandal concerning US financier Jeffrey Epstein.

The elder daughter of Prince Andrew and the Duchess of York, Beatrice married property tycoon Edoardo Mapelli Mozzi, at The Royal Chapel of All Saints at Royal Lodge, Windsor, in July 2020. The couple had been due to marry in May, but coronavirus delayed their plans.

Princess Beatrice’s baby daughter cane along in September 2021, and makes it into the top ten.

Princess Eugenie is the youngest daughter of Prince Andrew and Sarah, Duchess of York. As is the case with her elder sister Princess Beatrice, she has no official surname, but uses York. She married her long-term boyfriend Jack Brooksbank at Windsor Castle, on 12 October 2018.

Prince Edward was given the title Earl of Wessex and Viscount Severn on his marriage to Sophie Rhys-Jones in 1999. After a brief period with the Royal Marines, the Prince formed his own TV production company. He subsequently supported the Queen in many of her official duties and carried out public engagements for charities, and has quietly made a good name for himself within the family circle.

Viscount Severn is the younger child of the Earl and Countess of Wessex. The couple decided to give their children “courtesy” titles as sons or daughters of an Earl, rather than the style Prince or Princess. It is thought this decision was made to avoid some of the burdens of royal titles.

Born in 2003, Lady Louise Windsor is the elder child of the Earl and Countess of Wessex. She remains lower in the line of succession than her younger brother because she was born before a law came into force scrapping the system that meant a younger son could displace an older daughter.

The Princess Royal is the Queen and Prince Phillip’s second child and only daughter. When she was born she was third in line to the throne, but is now all the way down at 16th. She was given the title Princess Royal in June 1987. She married twice; her first husband Captain Mark Phillips is the father of her two children, Peter and Zara, while her second is Vice-Admiral Timothy Laurence.

Like her mother, she is a skilled horse-woman and competed in equestrian events for Great Britain in the 1976 Montreal Olympics. She is involved with numerous charities, including Save the Children, of which she has been president since 1970.

Peter Phillips is the eldest of the Queen’s grandchildren. He married Canadian Autumn Kelly in 2008 and together they have two daughters. The children of the Princess Royal do not have royal titles, as they are descended from the female line. Mark Phillips refused the offer of an Earldom when he married so their children do not have courtesy titles.

Savannah is the elder daughter of Peter and Autumn Phillips and was the Queen’s first great-grandchild.

Isla, is the second daughter of Peter and Autumn Phillips.

Zara Tindall, is the daughter of Princess Anne and Mark Phillips and followed her mother and father with a highly successful riding career, including winning a silver medal at the London 2012 Olympics. She has been married to former England rugby player Mike Tindall since 2011.

This list will obviously change as families grow, but in reality, baring a catastrophic event, only the top two on the list are ever likely to need to step up, with William hoping his own requirement will still be several decades into the future.