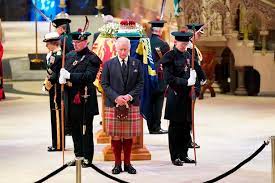 King Charles III and his three siblings, Princess Anne, Prince Andrew, and Prince Edward, have held a poignant ten minute vigil around their mother’s coffin this evening, at St Giles’ Cathedral, in Edinburgh, as members of the public filed past paying their respects to their former Queen.

Known as the Vigil of the Princes, it was first carried out back in 1936, when King Edward VIII and his three brothers, Princes Albert, Henry and George, stood by the coffin of their late father, King George V. Since then, it has only been done on one other occasion, at the funeral of the Queen Mother, back in 2002. The King, then Prince Charles, was one of the four people who stood by on that occasion.

This time the Queen’s children joined with the guard already in place around  her coffin, positioning themselves at each side. The Princess Royal’s appearance makes her the first woman to be part of a vigil of this nature, which has until now been carried out by male-only members of the Royal Family.

Walking behind the hearse

Earlier this afternoon thousands of people watched in impeccably observed silence as the Queen’s coffin made its journey up the Royal Mile in Edinburgh. Her Majesty’s children, led by King Charles III, along with Princess Anne’s husband, Vice Admiral Sir Tim Laurence, walked behind the hearse as it drove from the Palace of Holyroodhouse, to St Giles’ Cathedral. The Duke of York was the only one not in military uniform, because he is no longer a working royal, although he is expected to wear one as a special mark of respect, at a final vigil to be held at Westminster Hall, later in the week.

A car behind them carried Camilla, the Queen Consort, and Sophie, the Countess of Wessex, Prince Edward’s wife. The coffin, was draped with the Royal Standard in Scotland and dressed with a wreath of flowers. A service of remembrance followed in the cathedral. The crowd was 10 deep in places, as the procession took place on Monday afternoon. The respectful silence was punctuated by the echo of ceremonial gunshots, which were fired from Edinburgh Castle every minute.

The King had arrived in the Scottish capital after appearing at parliament in London earlier in the day. In his morning address the King promised to follow his mother’s “selfless duty” as he spoke in front of 900 MPs and peers at Westminster Hall. He said Parliament was the “living and breathing instrument of our democracy.”

His speech followed condolences read from the speaker of the House of Commons and Lords. Sir Lindsay Hoyle, said “As deep as our grief is, we know yours is deeper.” Addressing the King on behalf of MPs, Sir Lindsay added: “We know you hold the greatest respect, the precious traditions, the freedoms, and responsibilities of our unique history and our system of parliamentary government. We know that you will bear those responsibilities which fall to you with the fortitude, dignity, demonstrated by Her late Majesty.”

The King, in his response, said: “While very young, Her Late Majesty pledged herself to serve her country and her people and to maintain the precious principles of constitutional government which lie at the heart of our nation. This vow she kept with unsurpassed devotion. She set an example of selfless duty which, with God’s help and your counsels, I am resolved faithfully to follow.”

Built in 1097, Westminster Hall, the same hall where the Queen’s coffin will lie in state later this week, has played a significant role in British history across many centuries, a point not lost on the King as he continued his address: “I cannot help but feel the weight of history which surrounds us and which reminds us of the vital parliamentary traditions to which members of both houses dedicate yourselves, with such personal commitment for the betterment of us all. Parliament is the living and breathing instrument of our democracy. That your traditions are ancient we see in the construction of this great hall and the reminders of medieval predecessors of the office to which I have been called.”

Ceremony of the Keys

On arrival back at Edinburgh, King Charles III was welcomed on the tarmac by First Minister Nicola Sturgeon. They travelled to the Palace of Holyroodhouse, where there was applause as the King and the Queen Consort met members of the public. The King then took part in the ancient Ceremony of the Keys, where he was handed the keys to the city by the lord provost. In keeping with tradition, he handed them back, entrusting their safekeeping to the city’s elected officials.

In another short speech the new monarch said: “Through all the years of her reign, the Queen, like so many generations of our family before her, found in the hills of this land and in the hearts of its people a haven and a home.” Then paraphrasing Robert Burns, he described the Queen as: “The friend of man, the friend of truth, the friend of age and guide of youth. Few hearts like hers with virtue warmed, few heads with knowledge so informed.”  He then confirmed that he was passing his Duke of Rothesay title to Prince William.

The Queen’s coffin is now at rest on a catafalque – a raised platform – in St Giles’ Cathedral, Edinburgh, and will remain there until Tuesday afternoon. This has given the Scottish public an opportunity to view the Queen’s coffin and pay their respects. The queue for entry stretched more than a mile, from the historic cathedral deep into the city.

Twenty-four hours earlier, the coffin of Queen Elizabeth II had been brought to Edinburgh following a six-hour journey from Balmoral. Mourners lined the streets as the hearse travelled from Aberdeenshire to the Palace of Holyroodhouse. The Princess Royal, Princess Anne, travelled in a vehicle behind the hearse and on arrival, her brothers, the Duke of York and the Earl of Wessex, were there to meet them. At the start of the journey, six gamekeepers from her Balmoral estate placed the Queen’s oak coffin into a hearse as she left Balmoral, her beloved private Scottish estate, for the final time.

On Tuesday, the Queen’s coffin will be flown from Edinburgh Airport to Buckingham Palace, from where she will be moved to Westminster Hall, where she will Lie in State for four clear days.

The funeral will take place at Westminster Abbey on Monday, 19 September.