Exhumation of bodies continues in Izyum, Ukraine, days after hundreds of graves were found in recaptured areas 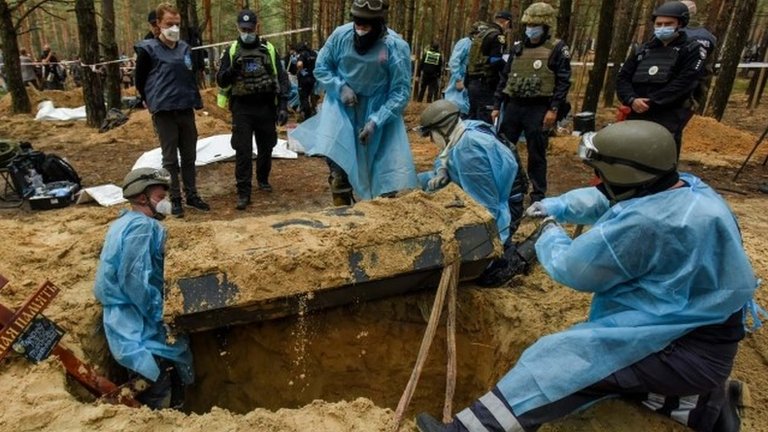 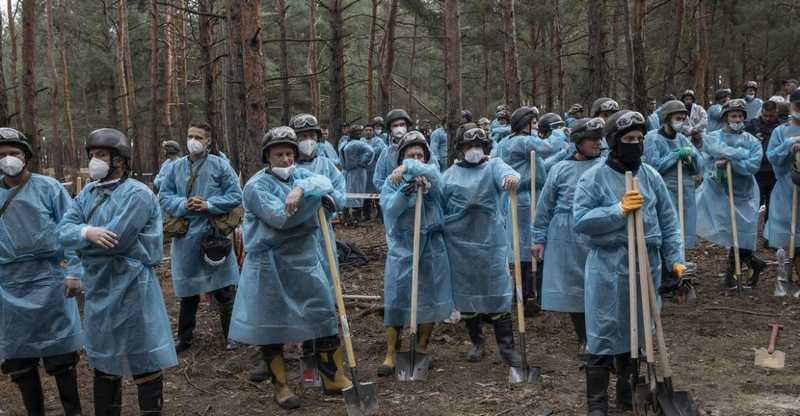 The counteroffensive by the Ukrainian army has pushed the Russian soldiers out of some occupied territories in Ukraine. According to reports, the occupiers left hurriedly, carrying their military tanks and some loots from Ukraine. Unfortunately, they were unable to take their footprint with them to Russia.

While residents of the liberated parts are excited that they could get their life back, the people of Izyum have very little to celebrate after the Russians left, as all that was left for them were mass graves. Officials say there are about 440 graves at the grave site operated by the Russians.

Serhii Bolvinov, the chief police investigator for the Kharkiv region, in an interview with Sky News, said: “I can say that there is one of the biggest burials in one liberated city, which contains more than 440 graves. Some 440 bodies were buried in one place.”

Mr. Bolvinov said some bodies at the grave site died because of artillery fire, airstrikes, and so-called mine explosion traumas, and others were shot dead.

“Also we have information that a lot of bodies have not been identified yet. So the reasons for death will be established during the investigations,” he added.

Images released from Izyum showed several wooden crosses on top of each shallow grave inside a place that looks like a forest.

“Russia leaves death everywhere. It must be held accountable for that. The world must hold Russia to real account for this war,” President Zelensky said after news of the mass graves emerged from Izyum.

After the recapturing of the city, photos and videos obtained from the burial site show the exhumation process of the buried victims.

“The whole world should see this. A world in which there should be no cruelty and terrorism. But all this is there. And its name is Russia,” President Zelensky wrote while posting pictures of the exhumation on Telegram.

The case in Izyum has been likened to that of Bucha a few months ago. Although the exhumed bodies include that of soldiers, most of the bodies are those of civilians, including children.

Bucha, Mariupol, and now, unfortunately, Izium… [Russia] must be responsible for it,” President Zelensky said.

The Commissioner for Human Rights in the Ukrainian Parliament, Dmytro Lubinets said among those exhumed was a family of three. He said: “There is a whole family right next to me… This is a young family… The father was born in 1988, the wife was born in 1991, and their little daughter was born in 2016.”

Dmytro said the family was killed by Russian airstrikes. He added that some of the bodies were of men of the Ukrainian army.

“Also we saw here a mass burial of servicemen of the Ukrainian army. The way they were buried — you will see evidence that their hands were tied, they were killed at close range,” Lubinets added.

Oleh Syniehubov, the Governor of the Kharkiv region described the situation as a “bloody brutal terror.”

“The scale of the crimes committed by the invaders in Izyum is enormous. This is bloody brutal terror,” Oleh said.

He said: “450 bodies of civilians with traces of violent death and torture were buried in a forest belt. It is difficult to imagine something like this in the 21st century, but now it is a tragic reality in Izyum,” adding that 99% of the exhumed victims showed signs of violent death.

“There are several bodies with their hands tied behind their backs, and one person is buried with a rope around his neck. Obviously, these people were tortured and executed. There are also children among the buried,” he said.

The calls to punish Russia

Jan Lipavsky, foreign minister of the Czech Republic, on Saturday, said it was time to establish a special tribunal that will prosecute Russia for crimes committed in Ukraine. “Russia left behind mass graves of hundreds of shot and tortured people in the Izyum area. In the 21st century, such attacks against the civilian population are unthinkable and abhorrent. We must not overlook it. We stand for the punishment of all war criminals,” the foreign minister said on Twitter.

“I call for the speedy establishment of a special international tribunal that will prosecute the crime of aggression,” he added.

President Macron of France also called for justice for the people of Ukraine and Izyum, saying “there is no peace without justice.”

“I condemn in the strongest possible terms the atrocities committed at Izium in Ukraine under the Russian occupation. The perpetrators will be held responsible for their actions,” he tweeted.

The search for more graves continues

After over three days of searching for buried bodies in Izyum, the search might continue for the next two weeks, Valery Marchenko, mayor of Izyum, said on Sunday.

“The exhumation is underway, the graves are being dug up and all the remains are being transported to Kharkiv,” Marchenko said. “The work will continue for another two weeks, there are many burials. No new ones have been found yet, but the services are looking for possible burials.”

Russia has not publicly commented on the graves in Izyum. When asked about it, Vitaly Ganchev told state television that he heard nothing about the graves.

“I have not heard anything about burials,” Ganchev said.