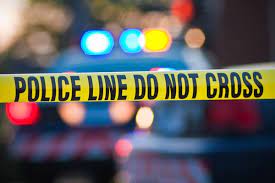 The first discovery was made around 8:30 at the Ottos Basketball court.

Reports indicate that Winston Palmer, a 63-year-old Jamaican man, was found lying face down slumped over the first and second row of a stand on the southern side of the court.

He was wearing brown multi-colored short pants, a beige and white shirt, a pair of black slippers, and a black wristwatch on his left hand.

A white foam container with the soup was also found next to the deceased who last resided at Bird Road Ottos.

The body was discovered by a man who usually frequents the area in the mornings and then contacted the caretaker for the court.

Police say foul play is not suspected at this stage of the investigation.

Meanwhile, lawmen are also probing the death of another male, Anderson Quinland alias Bankers whose body was discovered near a barbershop around 11:55 am on Sunday.

He was found lying on his back close to the building.