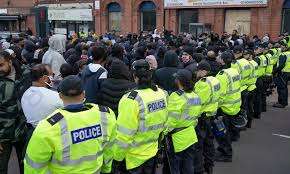 The city of Leicester in the centre of England, is an uninspiring location, with no particular landmarks; frankly it is rather dull. It made the news a few years back when against all the odds, their football team achieved the extraordinary feat of winning the Premier League, but otherwise it is a pretty un-newsworthy place.

It does however pride itself on its multiculturalism, but that has been shattered recently as violence has broken out between Hindus and Muslims, after decades of living in harmony, and the situation is now seeing riots break out amid heightened tension, heated confrontations, and large-scale disorder.

Leicester had become something of a “model city” for cohesion between different religious groups, embracing cultural differences and promoting group activities, with Asian festivals attended from far and wide. Solidarity existed between the faiths, with very little in the way of acts of violence, with both recognising that they faced identical issues of racism and discrimination.

Nevertheless, tensions have been building for some time in the communities, with the spark appearing to come from a cricket match between India and Pakistan at the end of last month.  Cricket is a major passion for both of these nations and matches between the two are often highly politically charged, but this was a very different matter.

Things turned really ugly in the crowd with clashes inside and outside the ground, then afterwards Indian fans walked through Leicester city centre screaming “Death to Pakistan”, a chant aimed more directly at the Muslim community.

Everyone is of the same opinion however, that this is absolutely not about cricket. The game may have inflamed existing tensions, or served as an opportunity for outside instigators to use it as a vehicle to pedal their hatred.

The most recent unrest came about following a protest for which police were caught off-guard in respect of turn-out. Some 800 or 900 people were involved, with less than 100 police officers trying to keep order in incredibly difficult circumstances. Part of the group were a large number in balaclavas and hoodies, operating more like a “military unit” as one eye-witness described them.

They are believed to be part of Rashtriya Swayamsevak Sangh, better known as the RSS, who are a paramilitary organisation set up in the early 1920’s, modelled on the Italian fascist leader Benito Mussolini’s Blackshirts, and who support the Hindutva ideology, and the establishment of a Hindu Rashtra.

Additionally, there were strong suspicions that many of those involved in the protest had come from outside of the city. Indeed, the Leicestershire constabulary confirmed that half of the people they had arrested during the disturbances were from addresses in other parts of the country, including Birmingham, Luton and London.

There was significant aggression aimed at the police throughout what was described as some very challenging situations. Sixteen officers received injuries of varying degrees, and a police dog was also attacked and left in a bad way. Many were hurt putting themselves in dangerous positions in order to protect the public from an increasingly angry and violent mob.

A police spokesperson said their primary objective was to keep separation between these large groups, although significant steps had been taken in terms of securing the video imagery of people at the scene. The Leicestershire Police Federation said the injuries to the police officers were “utterly despicable” with Chairman Adam Commons saying: “My colleagues do not come to work to be subjected to this type of behaviour and should not be going home nursing cuts and bruises, simply for trying to keep people safe.”

Misinformation on social media deliberately intended to mislead easily influenced individual groups, fanned the flames of unrest. Attacks on buildings that were untrue were posted to prompt reactions, as were accusations of assaults that simply had not occurred. Fake news was forwarded without validation, which had the effect of amplifying the issues and raising fear in the communities.

There is anger on both sides in equal measures. Footage shared by both Hindus and Muslims on social media, allegedly taken during the unrest over the past weeks, shows groups of masked men banging on people’s windows in Hindu-majority areas and pulling down religious decorations, and others marching down predominantly Muslim-populated streets, chanting: “Jai Shri Ram” which is a religious chant, now commonly co-opted by far-right Hindu nationalist groups in India.

Community leaders have been calling for calm and encouraging people to stay at home. A joint statement delivered on the steps of Leicester’s Jame Masjid mosque said: “Our two faiths have lived harmoniously in this city for over half a century after arriving together.” They continued to stress that they had faced the very same challenges, fighting off racist hate, and making the city a beacon of diversity.

Chain migration brought both faiths to the city in the fifties

After the 1947 partition of British India, when vicious religious violence erupted and left millions of people displaced, the following year the government brought in the 1948 British Nationality Act, giving every Commonwealth citizen the right to move to the UK.

Indians and Pakistanis came over to Leicester through what became known as chain migration, using previous family members who had already settled in the city, as a way in.

An uneasy lull has descended, but it seems to be temporary and there is genuine anxiety that extremist hardliners from both sides will continue to draw battle lines on social media and the next big confrontation is just around the corner.

Children are being kept away from school to avoid potential conflict, and families are removing religious symbols from the doors to their homes, previously displayed with pride, so as to escape identification from violent gangs.

The biggest fear is that this, as of yet, localised unrest, could have significant consequences, reaching way beyond Leicester and even the UK.