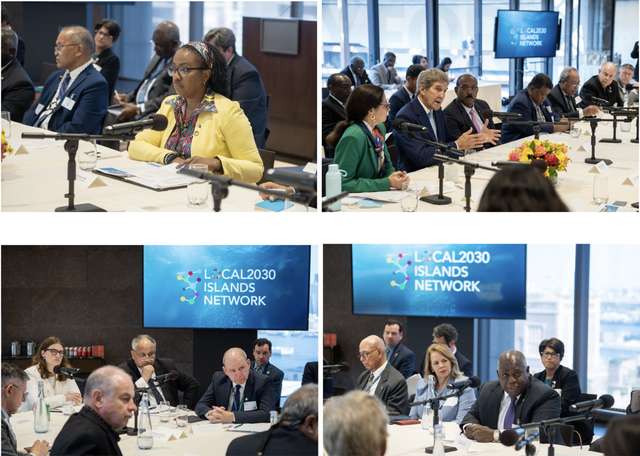 Palau Minister of State for Foreign Affairs Gustav N. Aitaro, and Special Presidential Envoy for Climate John Kerry also co-hosted the event, opening the meeting by outlining a shared vision for the Network to be a forum for candid dialogue and concrete action by its members to advance progress and island leadership on shared 2030 Sustainable Development Goals.

Prime Minister Browne, Minister Aitaro, and Secretary Kerry were joined at the in-person gathering by Leaders, Ministers, and other senior officials from Local2030 member islands, including the Republic of the Marshall Islands, the Federated States of Micronesia, Ireland, Aruba, and Hawai, as well as observers to the meeting, including Australia, Bahamas, Belize, and Sint Maarten.

Local2030 Islands Network partners, including the U.S. National Oceanic and Atmospheric Association (NOAA), Secretary of the Navy, UN Foundation, and the University of Guam were also in attendance. The meeting was moderated by U.S. Assistant Secretary of State for Oceans and International Environmental and Scientific Affairs, Monica Medina.

Since the first in-person meeting at the Our Ocean Conference in Palau in April 2022, the Network welcomed the membership of Guinea-Bissau and Aruba.

The Local2030 Islands Network has also begun preparations for the in-person Communities of Practice to bolster inter-island dialogue and knowledge sharing on unique development challenges and opportunities across three thematic communities, for which the United States announced an additional $1.3 million in support.

Additionally, Palau noted its progress on the creation of its SDG Dashboard, modeled after dashboards in Hawai and Guam.

Throughout their remarks, island members noted the challenges caused by the triple crises of COVID-19, climate change, and the conflict in Ukraine.

They spoke to the rising costs of living on islands due to inflation and increased fuel costs for transport, energy, and imports.

They also highlighted the increased devastation that climate-related impacts resulting in loss and damage are having on their islands and the threat that they pose to the longevity and prosperity of islands.

To address these concerns, island members called for concrete action amongst themselves and partner governments and organizations. Calls for action included: developing partnerships with universities to build capacity; shifting to renewable energy, and electric vehicles, and pursuing alternatives to traditional debt repayment.

Many members stressed the urgent need for substantially increased climate finance to help bridge the gap between ambition and implementation, as well as improved climate financing instruments, such as debt-for-nature swaps and ocean carbon capture.

Members also voiced the need to identify short- and medium-term actions; the long-term may be too late for islands, many of which are directly threatened by sea-level rise. Members called for major economies to reduce their carbon footprints.

The U.S. noted that the PREPARE Initiative is one avenue to address the impacts of climate change disproportionately impacting vulnerable communities.

Members emphasized the value of the three Local2030 Islands Network Communities of Practice on Clean Energy Systems, Sustainable and Regenerative Tourism, and Data for Climate Resilience, noting that the platforms are critical for peer learning and knowledge exchange.

Members noted indicators of progress on global climate action will be determined in what comes forth in the weeks leading up to and the outcome of COP 27 in Egypt and echoed the importance of global leaders leaving the COP with raised ambition and a clear path forward.

The Local2030 Islands Network champions this vision and island leadership for shared goals and the actualization of Agenda 2030.

The Network serves as a forum for island economies at all jurisdictional levels to learn from one another and bring island experiences to the forefront of sustainable development conversations. In the coming months, the Local2030 Islands Network will continue the expansion of island membership within the Network and convene the first in-person meeting of the Communities of Practice.

The third Local2030 Islands Network Leaders Meeting will be held during the 78th session of the UN General Assembly.