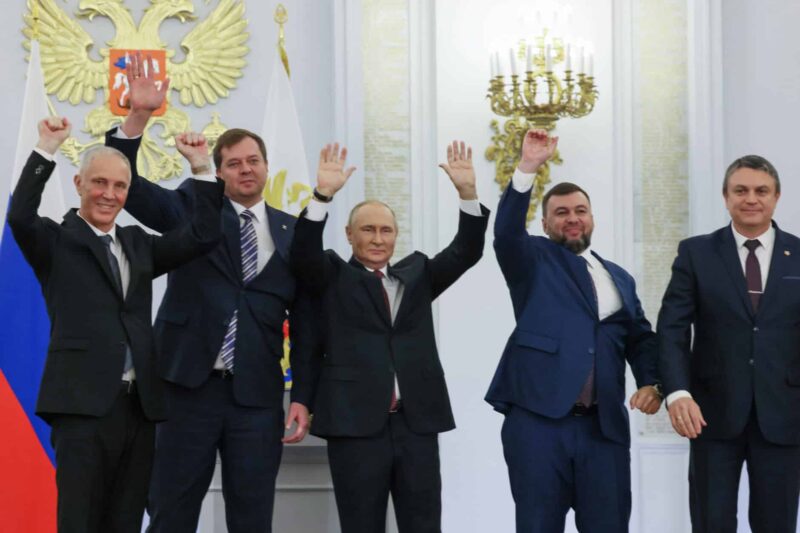 From left, Moscow-appointed head of Kherson Region Vladimir Saldo, Moscow-appointed head of Zaporizhzhia region Yevgeny Balitsky, Russian President Vladimir Putin, center, Denis Pushilin, the leader of the Donetsk People’s Republic and Leonid Pasechnik, leader of self-proclaimed Luhansk People’s Republic wave during a ceremony to sign the treaties for four regions of Ukraine to join Russia, at the Kremlin, Moscow, Friday, Sept. 30, 2022. The signing of the treaties making the four regions part of Russia follows the completion of the Kremlin-orchestrated “referendums.”

Earlier today (Friday 30 September) Vladimir Putin took his illegal war to the next level, when he held a signing ceremony at the Kremlin to rubber-stamp the annexing of four areas of Ukraine, which amounted to 15% of the country.

The four regions are: Luhansk and Donetsk in the east, which they already illegally occupied prior to the start of the war; plus Zaporizhzhia and Kherson in the south. Last week he staged notional Kremlin-conceived referendums, which were condemned by the international community as a complete sham, and at times involved armed soldiers going from door to door to gather votes using force.

Leaders for each region appointed

The formal documentation, to Putin’s mind at least, incorporates the four areas into Russian territory. He appointed each a leader, who joined in the pretence by putting their signatures to the spurious paperwork. It was all choreographed for maximum effect, with arranged applause from the invited audience and a stirring rendition of the national anthem that had outbursts of “Russia! Russia!” chanted at its close, from everyone in the hall.

Treaties to be submitted to parliament

With Ukrainian sovereignty dismissed, his next act is to submit the annexation treaties to the two houses of Russia’s parliament and address it next week, before his 70th birthday next Friday, after which time it will become, as far as the Russians are concerned, part of their constitution.

Putin’s ramblings at the West

In his speech today, Putin said the United States had created a “precedent” by using nuclear weapons against Japan at the end of World War Two; but in truth it was basically just an attack on the West and showed where his state of mind is right now. He had learned his lines and delivered them in a performance that had it been on a theatre stage, would have been described as “wooden” and unbelievable, not only from a truth perspective, but also from an incredulous point of view too.

He continuously went off at tangents, describing the West as being “greedy”, saying it wants Russia to be its “colony”. He bizarrely claimed that the West wanted to “see us as a crowd of slaves.” His rants became more ludicrous when he accused the US and Britain of sabotage, and referring to British people as “Anglo-Saxons”, he said they helped “organise explosions of the Nord Stream pipelines in the Balkan sea.” Putin also claimed Russia was not to blame for soaring global energy prices, saying instead this is a result of “many years of wrong policies.”

He asked for a minutes silence for his brave soldiers who he said had died during “special operations”, failing to acknowledge, or seemingly even appreciate, that their deaths were on his hands. He insisted that those people in the Donbas region will now become Russian citizens and are now part of the “great Russian motherland”.

Putin also called on Kyiv to immediately stop military action and return to the negotiation table, but such ideas will be firmly rejected by the Ukrainians. President Zelensky had said that any annexation would mean the end of the possibility of dialogue with Russia, and that Ukraine would continue with its offensive to retake all territory that is now in Russian hands. He also said they would be seeking to accelerate membership of Nato.

The European Council said Russia had blatantly violated the fundamental rights of Ukraine to independence and they would never recognise the illegal annexation. It added that it “stands resolutely” with Ukraine and will “strengthen its restrictive measures” on Russia.

Vow to protect territories that they don’t even fully hold

Russia has already warned that any attack on its “new territories” will be viewed as an attack on the integrity of Russia. The Kremlin says it reserves the right to respond “with all means available to it”. That includes, potentially, nuclear weapons. However, Russia does not fully hold any of the annexed regions.

More than 40% of Donetsk is in Ukrainian hands, Luhansk is at the centre of a major offensive, which the Ukrainians are winning, and on the verge of retaking the strategic town of Lyman. Zaporizhzhia’s regional capital is firmly Ukrainian-run, and their forces are only a few miles from the city of Kherson; so today’s charade, is just an attempt to persuade the Russian public towards justification for the outrages being played out in their neighbours country.

US and UK respond

President Biden said Russia’s fraudulent attempt to annex four areas of Ukraine violates international law and tramples on the United Nations Charter, showing its contempt for peaceful nations everywhere. He added that the US will “always honour” Ukraine’s “internationally recognized borders”, before promising to continue to support them in their efforts to regain control of its territory by strengthening its hand militarily and diplomatically, including through the $1.1 billion in additional security assistance that the United States announced this week.

The UK government says it will bring in new measures to restrict Russia’s access to key commercial and transactional services. The Foreign Office said it will also ban almost 700 goods that are critical to manufacturing production being exported to Russia. Foreign secretary James Cleverly says the sanction are targeted at vulnerable sectors of the Russian economy. He added: “The Russian regime must be held to account for this abhorrent violation of international law.”

Other leaders speak out

The French released a statement which said they seriously oppose the annexations and stands alongside Ukraine to recover its full sovereignty and its entire territory in the face of Russian aggression.

Meanwhile thousands of Russians continue to try and flee over borders to escape being called-up to join a fight they have no wish to be involved with. So much so that Finland has now joined Lithuania, Latvia, Estonia and Poland in closing its borders to Russian citizens.

“Party” in the square

After the signing ceremony a huge concert was thrown on Moscow’s Red Square, with Putin making an appearance on stage. Once again it all was blatantly staged for the live TV broadcast in a shameful attempt at justification of their abhorrent criminal actions.

It’s clear that initial rounds of sanctions have not hit Russia as hard as was initially predicted and hoped. Next up is a focus on depriving Putin of what he needs to fight and fund his illegal war, therefore curbing his oil and gas profits, is likely to be next on the agenda.