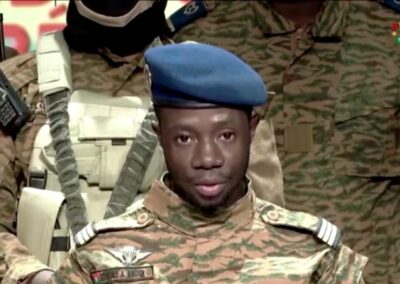 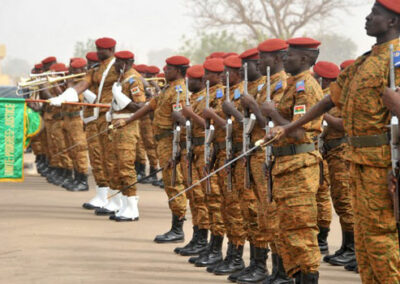 Barely 24 hours after Burkina Faso’s military leader, Paul-Henri Damiba, was ousted in a coup, tension has increased in the West African country, as there are expectations of a possible fight back.

The country’s new leader, Captain Ibrahim Traore, said Damiba was planning a return from a French military base.

“Damiba has tried to retreat to the Kamboinsin French military base to prepare a counteroffensive in order to sow divide amongst our defence and security forces,” a statement by the new military government reads.

Captain Ibrahim Traore, who was part of the coup that brought Damiba to power earlier this year, Friday, announced his removal from office, nullification of the country’s constitution, and closure of the country’s borders.

“Damiba’s actions gradually convinced us that his ambitions were diverting away from what we set out to do. We decided this day to remove Damiba,” the new military government said in a statement on Friday.

Although his whereabouts remain unknown, the former leader of the military junta denies taking refuge at a French base. What he failed to deny was if he was planning a counteroffensive to take back his lost powers.

“I formally deny having taken refuge at the French base in Kamboincé. It’s just an opinion manipulation intoxication,” Damiba said on Facebook.

“I call on Captain Traoré and company to come to their senses to avoid a fratricidal war that Burkina Faso does not need in this context,” he added.

Following claims that Damiba was in a French military base, planning a regrouping,Burkinabes on Saturday stormed the country’s embassy in protest of the role of France in the country’s crises.

The French embassy in Ouagadougou was quick to deny the claim. It said French forces “never hosted Paul Henri Sandaogo Damiba nor has our embassy.”

“We condemn in the strongest terms the violence against our diplomatic presence in Burkina Faso. Any attack on our diplomatic facilities is unacceptable,” the ministry later said.

Earlier reports suggest there were gunshots in the country’s capital as there was a high military presence, as the tempo in the city is high.

ECOWAS, AU, and the UN condemn the military takeover

The Economic Community of West African States (ECOWAS), the African Union, and the United Nations have all condemned the actions in Burkina Faso.

“ECOWAS finds this new power grab inappropriate at a time when progress has been made,” the statement read.

Mr. Damiba has promised to return the country to constitutional rule by July 2024, and the ECOWAS is now skeptical of what would happen with a new man in government.

The chairperson calls upon the military to immediately and totally refrain from any acts of violence or threats to the civilian population, civil liberties, or human rights,” the African Union said in its statement.

In January this year, Damiba overthrew the country’s democratically elected president Roch Marc Christian Kabore and was sworn-in in February.