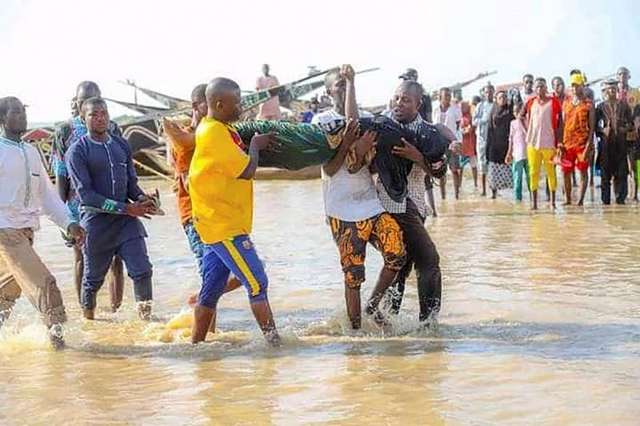 Tragedy struck in the South Eastern state of Anambra on Friday as a boat capsized, killing 76 people out of the 85 on board. The victims were escaping from the rising waters in their community.

Mr. Thickman Tanimu, the Zonal Coordinator of the National Emergency Management Agency, South-East, said the victims did not heed the government’s warnings, and only attempted to do so when it was too late. He said they were on a last-minute run when the incident happened.

“They decided to escape the rising water and 85 of them jam-packed inside the boat which capsized due to the rising flood,” Mr. Tanimu said. “It is very unfortunate because the flood has covered many houses up to the roof level. Out of the 85 persons, nine were found and the remaining 76 are nowhere to be found.”

Mr. Afam Ogene, a resident of the area, said the boat’s engine failed and it could not withstand the waves.

“It is a locally made boat that can take more than a hundred people, unfortunately, its engine failed and there was a stampede,” Ogene said.

A similar incident also occurred in another part of the state, killing dozens. Families of the victims said the government has not made any attempt to recover the bodies of victims.

The government warned in advance

Last month, Mustapha Habib Ahmed, director of the National Emergency Management Agency, had earlier warned citizens to expect floods in over 20 of the 36 states.

He said, “Based on our communication with the Nigeria Hydrological Services Agency (NIHSA), the Lagdo dam operators in the Republic of Cameroun have commenced the release of excess water from the reservoir by 13th September 2022.”

He asked “all the governments of the frontline states to move away communities at risk of inundation, identify safe higher grounds for evacuation of persons, and preposition adequate stockpiles of food and non-food items, potable water, hygiene, safety, and security to enable them a fair level of comfort during periods of possible displacement.”

“These actions become necessary as we collectively work towards a lasting solution to the annual threats of floods,” Ahmed said.

Flooding in southern Nigeria is not something new. Every year, there is a relatively high level of water in September through November even when rainfall is mild. However, at least once in about 10 years, the flood gets out of hand and sometimes covers buildings. The last time it happened was in 2012 when thousands of people relocated to higher lands for one month.

The country’s president, Mohammadu Buhari, on Sunday through his media assistant said he was saddened by the incident.

“President Buhari said he was saddened by the boat accident and directed that all possible efforts be made to account for all the passengers,” Garba Shehu said.

He added that the president has ordered rescue and relief agencies to rush to the site to commence operations and called on relevant agencies to avert such incidents in the future.

Mr. Tanimu said NEMA was in talks with the country’s airforce and navy to see how trapped victims could be airlifted from the area.

“With the rising flood, airlifting is the only solution right now. Any boat that goes in there is likely to capsize because the flood has covered houses to roof level,” he said.

“The 82 Division of the military is preparing and once they get the go-ahead from Abuja, we will begin to airlift those who want to leave because our people are very conservative and they might refuse to leave,” he added.