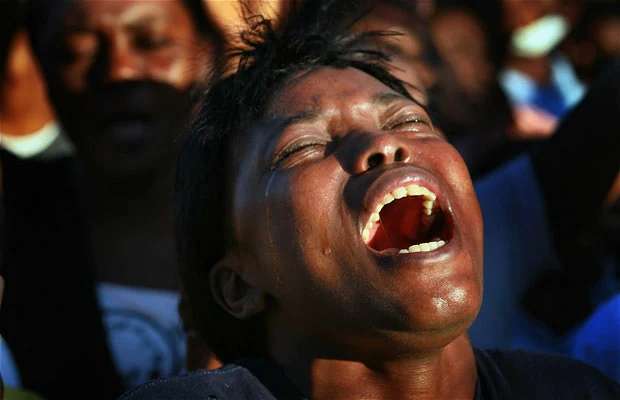 From major earthquakes to plagues, gang violence, and water shortages. It would not be an exaggeration to say that some Haitians are living in hell as if they had danced with the devil for far too long.

It is not even quite clear to say distinctively where Haiti’s troubled path began but self-proclaimed experts blamed geography and bad luck for that country’s calamitous state. But could it be that this is a deliberate action by the former colonial masters to punish Haitians for fighting fiercely for their freedom? … Let us not forget that their freedom fighter Toussaint Louverture was kidnapped and imprisoned till his death.

But what has left Haiti in such a terrible state today? What makes that country a constant and heart-rending site of ­recurring catastrophe, is its history.  “POVERTY”, seems to be the underlying issue.

But what is obvious is that, in Haiti, for as long as can be remembered, this country has combined to produce a people so poor, an infrastructure so nonexistent and a state so hopelessly ineffectual that whatever natural disaster chooses to strike next, its impact on the population will be magnified many times over.

To be honest, every single factor that international experts look for when trying to measure a nation’s vulnerability to natural disasters is, in Haiti, at the very top of the scale.

But while Guterres made that proposal, he left out specifications on whether that help with come from the United Nations.

He said the 15-member Security Council should simply welcome such a force and notes that he may boost the U.N. capacity to support a ceasefire or humanitarian arrangements and ensure coordination of efforts with an international force.

Haiti last week said it would ask for a “specialized armed force” to help combat a crisis caused by a blockade of its main fuel port by a coalition of gangs that have crippled transport and forced businesses and hospitals to halt operations.

The blockade has also led to a shortage of bottled water, just as the country confirmed a new outbreak of cholera, the spread of which is controlled through hygiene and clean water.

Guterres said a rapid action force “would, in particular, support the HNP (Haitian National Police) primarily in the Port-au-Prince metropolitan area in securing the free movement of water, fuel, food, and medical supplies from main ports and airports to communities and health care facilities.”

“To this end, the force would support the HNP’s efforts to remove the threat posed by armed gangs and provide immediate protection to critical infrastructure and services,” he wrote.

Guterres said one country would need to lead the rapid action force and that the force “would be gradually phased out as the HNP regained state control of critical infrastructure targeted by gangs and began to restore general security and freedom of movement.”

At that point, Guterres said the deployment of a multi-national police task force or multi-national special force could be considered to help Haiti in the medium term. He was not suggesting that such a force would be a U.N. deployment.

The Security Council had asked Guterres in July to consult with Haiti, relevant countries, and regional groups on “possible options for enhanced security support” for HNP efforts to combat high levels of gang violence” and report back by Oct. 15.

Many promises made by world bodies regarding helping Haiti out of its dilemma have not been materialized, just leaving Haiti in its melodramatic state.

Even CARICOM seems to be long on words but short on specifics about Haiti.

The body said last week that it is gravely concerned by the continuing deterioration of the security situation and the social circumstances in the Republic of Haiti saying that it is aware that there is a continued breakdown in law and order, and its distressing effect on the people of Haiti, is intensifying.

“The unrest is hurting the already weak economy leading to even more mass demonstrations. Especially, the worsening social conditions and the limited availability of food require urgent and immediate attention from the international community,” CARICOM said.

But while these “compassionate” press statements are flying left right and center, Haitians have been risking their lives in small boats in the dead of night to escape a country that they say they wouldn’t even want to be buried in.