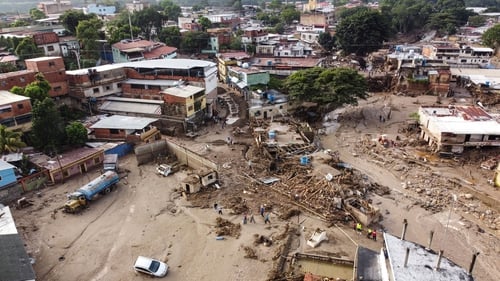 Neighbors in the town of Las Tejerias in Venezuela, on Monday, helped rescue teams comb through mud and debris for signs of life as dozens of people remain missing following a landslide that killed at least 36 persons.

Over 3,000 rescuers were deployed in the community, after the country’s worst natural disaster in decades.

Residents used shovels and any tools they could find to dig through the mud deposited on the town Saturday while firefighters used chainsaws to clear a path through knocked-down trees that had been carried into the town.

“Unfortunately, we have 36 people dead at the moment and 56 people missing,” Interior Minister Remigio Ceballos said on Twitter.

A survivor, 45-year-old Isaac Castillo said “Las Tejerias will never be the same. We are leaving because recovering from this is impossible.”

“It came too fast, we had no time,” 60-year-old resident Carlos Camejo said.

As Carmen Melendez, 55 waited desperately for news on the whereabouts of a missing relative, she told AFP, that “Las Tejerias is lost.”

President Nicolas Maduro, who visited the area on Monday, insisted that the town would be rebuilt.

“We take with us the pain, the clamor, the despair, the tears of the people, but they must know that Las Tejerias will rise like the phoenix, Las Tejerias will be reborn,” he said, vowing to rebuild “everyone” of the homes and businesses destroyed.

The unusually heavy rains on Saturday caused a major river and several streams to overflow resulting in mudslides that swept away cars, parts of homes, and businesses and felled massive trees.

Vice President Delcy Rodriguez said, “as much rain fell in eight hours as normally falls in a month.”

She added that 317 homes were ” destroyed” and 757 damaged by the mudslide.

Experts believe that the storm was aggravated by the seasonal La Nina weather system, as well as the effects of Hurricane Julia, which also claimed at least 26 lives in Central America on Sunday.