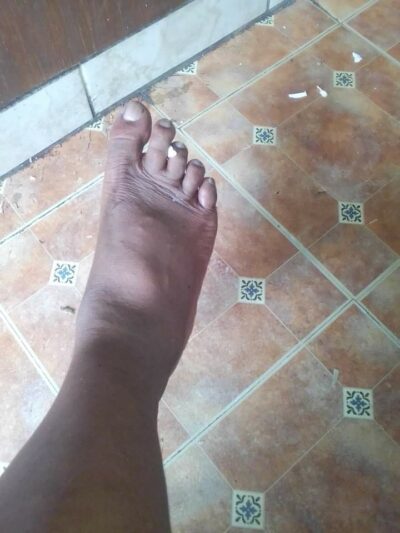 When Nathalie Mathew booked what was expected to be a day of fun and excitement at one of the elite resorts here, she never thought her time would have left her nursing serious injuries to her leg.

Mathew, who checked in at the all-inclusive resort on Sunday for a day pass to celebrate a special occasion with her partner, injured her leg while she was on her way to get lunch.

She is demanding a full refund from the resort which she says has shown her no remorse. The woman is also seeking legal redress.

“There was a hole but it was covered by grass. If I had on my shoes maybe my foot would have gotten broken…I managed to hop up, hop up…The maintenance manager came, and a supervisor wrapped up my foot for the pain. I never enjoyed myself. I am due for an x-ray at the hospital,” Mathew explained.

Mathew said she is in excruciating pain and unable to move around due to the injury which has prevented her from working.

The woman said no one from the property has reached out to her, quite a shocking revelation.

“When we were leaving, we asked what are they going to do. They told us we signed a waiver and they are not responsible. I didn’t see the hole. It was covered with grass. I am a little fluffy I have one weight so I won’t directly walk into a hole to hurt myself. Nobody called to see if I was all right, she said,” the woman said.

The property, which cannot be named at this time, due to the sensitivity of the matter, is refusing to take responsibility due to a waiver that the guests were asked to sign.

Mathew also acknowledged that while she did sign the waiver, she was not fully aware of the details.

“I did sign it. When we came in, they ask us to sign this paper but I didn’t know what was in that waiver,” she admitted.

A manager at the resort said an incident report was not filed and without that information, they were unable to provide any details as it relates to the incident.

The manager said they will be reaching out to Mathew to get a full understanding of what occurred.

The individual also explained that waiver and release form is mandatory for everyone, especially in the case of all-inclusive resorts.