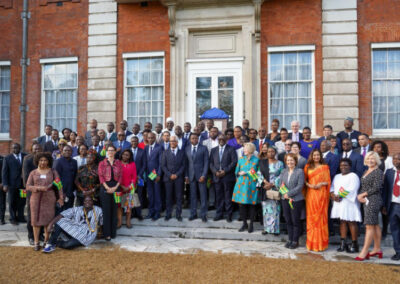 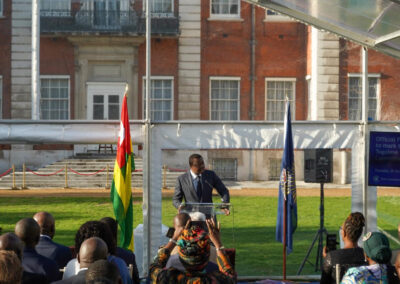 The flag of Togo was raised for the first time at the Commonwealth Headquarters in London, formally marking the country’s entry into the 56-member association.

As the tradition goes, a special flag-raising ceremony was held today in the presence of the Commonwealth Deputy Secretary-General, Dr Arjoon Suddhoo, and the President of the Togolese Republic, H.E. Faure Gnassingbé.

They were joined by guests including high commissioners, senior government officials, the Togolese diaspora, and the media.

In remarks welcoming Togo to the association, the Commonwealth Deputy Secretary-General said “Togo’s journey into the Commonwealth has been a long time in the making. We walked the journey for many years, as the Commonwealth provided guidance to Togo’s efforts and commitments to embody the values of the Commonwealth Charter. Togo has shown commitment to meeting institutional and governance reforms. The Government of Togo has demonstrated clear action in developing its economy and infrastructure; in providing a conducive business climate and stability to attract tourism and investment”.

President Gnassingbé on his part said “It is my great pleasure to address this audience on this highly symbolic occasion and to express the joy and pride of the people of Togo as we gather here today to raise our flag among those of the great Commonwealth of Nations family.

“As we celebrate this remarkable milestone, I would like to solemnly ask each one of you to bear witness to Togo’s renewed pledge to the values of peace, democracy, and development, which are the core values of the family we are joining.

The flag of Togo was then ceremoniously raised on the roof of Marlborough House to the tune of Togo’s national anthem with guests looking on in awe.

By joining the Commonwealth, Togo’s Embassy in London now officially becomes a High Commission. To mark the occasion, a plaque commemorating the move was unveiled.

Members can also access a variety of training and technical assistance resources and benefit from more than 50 strategic partnerships with renowned organisations such as the United Nations, the African Development Bank, and the World Trade Organization, to create the conditions for people across the Commonwealth to flourish.

Togo will now also be able to take part in major Commonwealth summits and ministerials which bring together government leaders, from developed and developing nations, to help amplify collective action on global challenges.