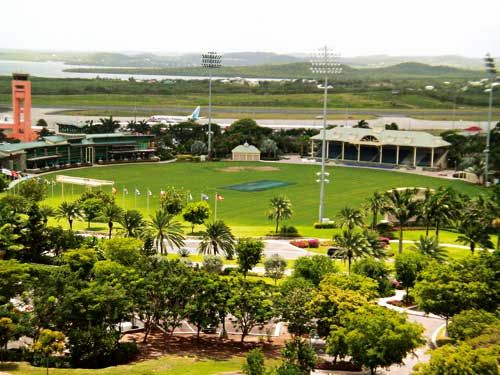 Plans to transfer the ownership of the Coolidge Cricket Ground to Cricket West Indies have moved one step closer to realization.

Chief of Staff in the Office of Prime Minister Lionel “Max” Hurst provided an update on Thursday, during the weekly Cabinet press briefing.

The facility is jointly owned by the government and Cricket West Indies. Before that, it was taken over by American businessman, Allen Stanford, rebuilt in 2004, and renamed the Stanford Cricket Ground.

But when Stanford was arrested and charged and subsequently jailed for his involvement in a Ponzi scheme, the government and CWI took over.

“Cricket West Indies will become the owner of those grounds. As you know when the Sanford empire collapsed the cricket ground became part of the Stanford assets that were held by the receiver. The idea is to pass it on or to sell it to someone and that sale is about to be consummated,” Hurst said.

Meanwhile, Hurst said the Cricket West Indies has partnered with the Ministry of Sports and will repair and replace all the non-working lights at the Sir Vivian Richards Stadium, in preparation for hosting the Super 50 matches.

On November 1st commencing at 1:00 pm, the Sir Vivian Richards Stadium will host a match between the Leewards and Jamaica.

That Match will be broadcast live around the world. Entry to this match will be at no cost on Independence Day, while the Annual Food Fair will also be taking place. On December 9th, V.C. Bird Day, Sir Vivian Richards Stadium will host another match. The same conditions will apply where there is no cost.

That match will be between West Indies Women and England Women. Cricket West Indies is still working with APUA using its MPLS network; however, it still needs dark fiber from the Stadium to operate its media headquarters at Coolidge.