US$111.4 million worth of cocaine in the Caribbean Sea 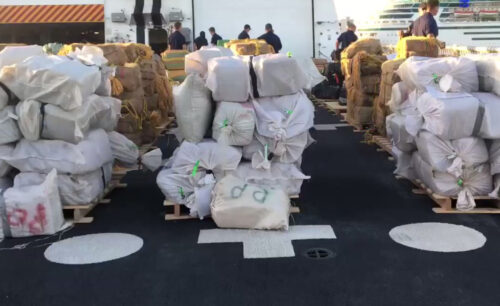 Close to 8,000 pounds of cocaine has been seized in the Caribbean Sea by The United States Customs and Border Protection (CBP) agency.

The Air and Marine Operations (AMO) said on Saturday that the major drug bust was possible with the help of its federal and international partners.

The drugs seized, has a street value of US$111.4 million in proceeds.

CBP also said that a P-3 Airborne Early Warning crew again detected a suspect vessel near Curacao and “notified a US Coast Guard team, which interdicted the vessel and seized 900 pounds of cocaine.”

“This partnership bolsters support to US and international law enforcement by sharing information and intelligence to help identity, track and disrupt suspected illicit trafficking targets. AMO safeguards our nation by anticipating and confronting security threats through our aviation and maritime law enforcement expertise, innovative capabilities, and partnerships at the border and beyond.  With approximately 1,800 federal agents and mission support personnel, 240 aircraft, and 300 marine vessels operating throughout the United States, Puerto Rico, and US Virgin Islands, AMO serves as the nation’s experts in airborne and maritime law enforcement,” CPB said

In 2021 alone about US$73.3 million of drugs were seized in the Caribbean sea.