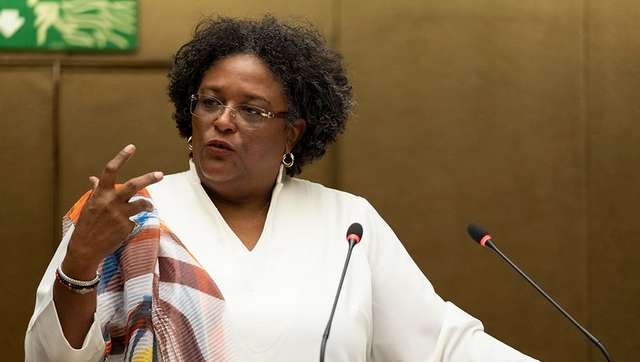 The move which will take effect on October 26 will see a change in portfolios for Dr Jerome Walcott, Minister Kerrie Symmonds, Senator Lisa Cummins and Ian Gooding-Edghill.

In spite of mounting calls by parents and the wider pubic for the firing of McConney over the controversial Inter-American Development Bank (IDB) survey fiasco, the Prime Minister expressed her confidence in the minister by bot sacking her.

Senior Minister of Social Sectors and Environment Dr Walcott’s new portfolio will be Minister of Health and Wellness, a position held by Gooding-Edghill who from the 26 will be given the portfolio of Minister of Tourism and International Transport.

Additionally, Bridgetown MP, Corey Lane, the former parliamentary secretary in the Ministry of People Empowerment and Elder Affairs, will serve in the Office of the Attorney-General as Minister of State with responsibility for Crime Prevention.

In July 2020, Mottley also made a Cabinet reshuffle, relieving George Payne, Trevor Prescod and Lucille Moe of their ministerial duties.

Prime Minister Mottley says these latest changes are necessary to improve the efficiency of Government.

“I have now like any good captain to make some adjustments again to make sure that we will extract the best and the most that we can extract in order for us to wrestle down these challenges that are within our capacity to fight. We need to come together strong to fight dem other ones,” she said.

“Accordingly I have advised that there will be adjustments to my Cabinet as of Wednesday, October 26. The adjustments are intended to strengthen the Government’s hand to deal with the issues that are before us. I have confidence that we can do it and when you understand what the adjustments are you will understand the wisdom of the decisions that we are making today,” stated Mottley.