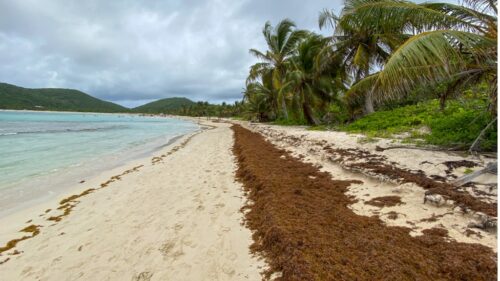 More Sargassum blooms could be coming in months according to Marine Ecologist at the National Park Authority, Ruleo Camacho and the advice is to take heed.

Camacho, wrote in the latest report that although sargassum quantities have decreased steadily over the last few months, particularly within the Caribbean Sea regions, it continues to set historical records, with the total amount remaining at around 8.5 million tons,

The University of South Florida Optical Oceanography Lab which has been

The Lab said September total is roughly 20% higher than the previous September record in 2011.

The passage of tropical systems Fiona and Ian are suspected to have both contributed to a decline in the amount of Sargassum in region. In the Caribbean Sea and Gulf of Mexico, Sargassum levels have decreased roughly 40% from August.

“This means we should be nearing the end of this Sargassum Season, but based on Map 2 and the quantity of Sargassum being seen to the East of the islands, I would say we are not out of the woods yet. I urge all stakeholders to remain vigilant and be prepared for more beaching events over the next few months,” Camacho wrote.

The seaweed grows on the ocean surface and provide ecosystem services such as habitat for juvenile marine organisms (e.g. fish, crustaceans, sea-turtles) and foraging areas while on the sea

surface, but biologically degrade upon contact with the shoreline, leading to negative impacts.

Recent studies have also shown that the degrading sargassum can contain heavy metals, such as arsenic and cadmium, which can be toxic to human and animals.