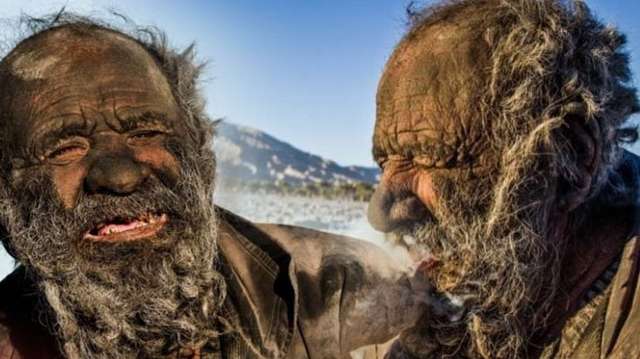 An Iranian hermit nicknamed as “world’s dirtiest man,” and known for going more than half a century without taking a shower, has reportedly passed away at the ripe old age of 94, state media has reported.

According to the IRNA news agency, Haji, a solitary man, died on Sunday in the village of Dejgah in the southern province of Fars.

Local media reports that Haji has not taken a bath with soap or water in over 60 years and that he had avoided eating fresh food for decades. Pictures of the ascetic showed him seated in the mud, with his garments and skin stained with dark tarnish.

Because he believed taking a shower would make him “get sick” and unlucky, Mr. Haji decided to forego doing so. Some villagers were also reported to have said he had experienced “emotional setbacks in his youth” that led him to refuse to wash.

IRNA, however, reported that “for the first time a few months ago, villagers had taken him to a bathroom to wash.”

“Not long after, he fell ill and finally, on Sunday… he gave up his life,” according to the news agency.

Although Amou Haji had never been married and appeared to have no children, the villagers in the area were said to have had some sympathy for the eccentric man and had even constructed him a cinderblock house so he wouldn’t have to sleep in a hole in the ground.

In recent years, he attracted attention after individuals posted videos of his peculiar behavior, which included smoking up to five cigarettes at once or smoking dung from a metal pipe.

In 2014, the Tehran Times reported that Haji would eat roadkill – preferring rotten porcupine meat – and drank five liters of puddle-collected water from a rusted bucket daily.

Despite leading an unconventional lifestyle, he maintained a strong constitution up until recently. Early this year, reports stated that a team of Tehrani doctors had checked him and had deemed him to be in decent health.

After Haji’s passing, an Indian man named Kailash Kalau Singh, who likewise had not taken a bath for a significant portion of his life could assume ownership of the unofficial record.

According to a 2009 article in the Hindustan Times, Kailash “Kalau” Singh, a resident of a town outside of Varanasi, has chosen to forgo washing for more than 30 years in an effort to help fix “all the problems confronting the nation.”