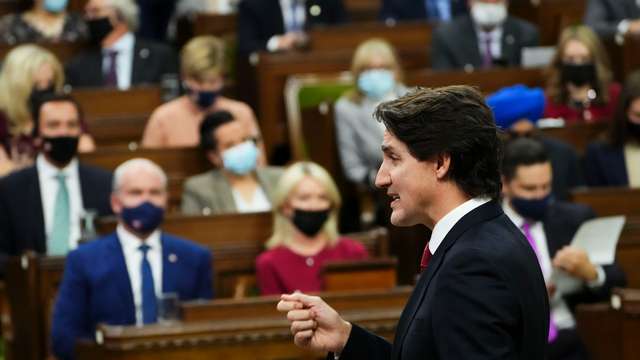 Wednesday was another historic day in Canada as members of parliament voted overwhelmingly against severing ties with the British Monarch. The vote became necessary after 14 recently elected Quebec politicians refused to recite the oath of allegiance to the King during their swearing-in to the legislature of the province as Canadian law demands.

The leader of Bloc Quebecois Yves-Francois Blanchet introduced the controversial motion that sparked debates about the monarchy in the House of Commons. Despite knowing that the motion would fail, Mr. Blanchet said it was necessary to prove to the people of Quebec that the federal politicians “prefer to support the King that the people” of the country.

Blanchet had stated earlier that members of parliament recite the oath because it is something they need to do. He described the system as “archaic” and called for its total abolition.

“It is a thing of the past, it is almost archaeological, it is humiliating,” he said. “We are a conquered people that still have to swear allegiance to a conquering King.”

How the people of Quebec feel about the throne

For many years, the people of Quebec, in Canada, had consistently called on the government of Canada to cut ties with the British throne. In 1970, members of Parti Quebecois, a political party in Quebec openly criticized swearing allegiance to the British Monarch. The call led to the introduction of a supplementary oath in 1982, which allows another pledge of loyalty to the people of Quebec.

The people of Quebec have voted against independence on two occasions and the calls to be independent have been minimal lately. However, they often differentiate themselves from English-speaking Canada. The crown’s criticism is more intense in Quebec than in other parts of the country.

In a poll recently conducted after the death of Queen Elizabeth, 54% of Canadians want the country to cut ties with the Monarch. As many as 79% of Quebecers voted to sever ties with the crown.

What the law says

Every Canadian agrees that sooner or later, the country will have to do away with the crown. However, the country’s Constitution of 1867 states that every member of a provincial legislature must recite the oath of allegiance.

With the clear stand of the law, the state of the 14 Quebecers remains unclear. According to law, they are not yet members of the provincial legislature. Some have argued that an alternative oath should be designed for those objecting to swearing allegiance to the King.

For that to happen, the approvals of the House of Commons and the Senate in Parliament are needed. The consents of all the 10 Canadian provinces are also compulsory.

However, prime minister, Justin Trudeau, insisted that the monarchy offers Canada “extraordinary stability” and that no Canadian, including Quebecers, wants a modification to the country’s constitution.

“There is not one Quebecer who wants the constitution reopened,” Trudeau said in response to Blanchet’s motion.