The world’s longest cable car is under construction in Dominica 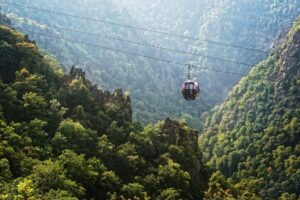 Dominica will boast of having the world’s longest cable car in the world, once the project to build it is finished.

He made the announcement while presenting the feature address at the annual Diaspora Dialogue held at the State House Conference Center this week.

“We are also building, and it has started, the longest cable car in the world. That cable car will take you up to the Boiling Lake, creating more opportunities,” Skerrit said.

He told those gathered at the yearly diaspora meeting this week that the project will be a major attraction to the Caribbean and the world by extension.

“Because there are a lot of cruise ships coming in, and this cruise season we are increasing the number of cruise [passengers] by 80,000 people coming out on the ships,’ Skerrit added.

He says apart from the benefits of many and the opportunities that it may present, the new car cable could be a plus for the elderly who may not necessarily want to walk and people who have disabilities as well.

“Senior citizens may not be able to walk too much and may want to relax, but many of you here I am sure, most of you if you had the cable car now, would go visit the Boiling Lake. You have people who might be physically challenged who want to enjoy the same things we enjoy, and so we look forward to the completion of this cable car,” he said.

According to reports, the project will be recorded in the Guinness World Records as the longest cable car in the world, surpassing the ‘Ba Na Big’ Cable Car in Vietnam (5.8 kilometers long). The project is costing $275 million.

After the completion of the project, another 100 Dominicans will be directly employed, and over 200 will get business and employment opportunities indirectly, such as taxi drivers, souvenir shops, local food vendors, tour guides, and many others.

Outdoor Engineers – (a European company based in Switzerland) conducted a feasibility survey in Dominica, which revealed that the completion of the cable car project would boom tourism in the Caribbean country by three times.

It also stated that during the current cruise season, Dominica hosts about two cruise ships every day, and after the cable car project, cruise calls will increase to at least six a day.