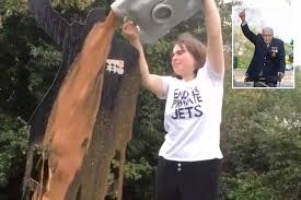 A young woman from Wales, who inexplicably poured human excrement over the memorial statue of Sir Captain Tom Moore, has been given a suspended jail sentence. Madeleine Budd targeted the sculpture of the World War Two veteran and NHS fundraiser, as part of a climate protest in a small South Derbyshire village, on 30 September this year.

The 21-year-old, from Manchester, was given a 21-week jail sentence, which was suspended for 18 months, by District Judge Louisa Cieciora, when she appeared at Westminster Magistrates’ Court on Wednesday 26 October. She was also ordered to pay £200 in compensation, £85 in costs and a £154 victim surcharge. Previously, she had admitted one count of criminal damage at the same court.

Ms Budd, who had been remanded in custody for the previous three weeks awaiting sentencing, after pleading guilty to causing £200 worth of criminal damage, apologised from the dock for any offence caused to the family of Sir Captain Tom by her actions. She was actually in breach of a conditional discharge at the time of the disgusting act of vandalism, for an incident earlier this year when she invaded the Oval cricket ground in London.

She had travelled to the quiet and pleasant spot close to Tutbury and Hatton railway station, in beautiful Derbyshire, to deliberately perform her unconventional dirty protest in an act that was filmed and then the video footage was released on Twitter by the action group: “End UK Private Jets”. It sparked a nationwide outcry with a mixture of outrage, disbelief and repulsion, at her scandalous deed. Two days later Ms Budd was arrested in central London after being picked out of a crowd that had gathered near Embankment Tube Station, to march for her cause.

In court, David Burns, prosecuting, said the protester approached the memorial in Thistley Meadow, Hatton, and proceeded to “pour a bucket of human faeces all over the statue” of someone who had become something of a national hero. He told those present that the incident was filmed and shared on social media as part of an environmental protest, and that the act had caused “serious distress” as well as “huge outrage in society in general.” He pointed out that Captain Tom was a figure well-known to the public, with his work and charity fund-raising having a great impact during the Covid crisis, and as a consequence, he pushed for the Judge to impose a custodial sentence.

This was in light of what District Judge Louisa Cieciora had said when Ms Budd had originally appeared before her following her initial arrest. When declining an application for bail as there were in the Judges words “substantial grounds” to suspect Ms Budd would commit a similar offence, she warned the protester that she could face between 12 and 18  months in jail.

Defending Ms Budd was Katie McFadden, who pointed out to the Judge that although people were offended at her client’s actions, that alone was not enough to pass the custodial threshold. She added that Budd herself described Captain Sir Tom as a “hero”, and although possibly misguided, had used the stunt to raise awareness around the climate emergency and the use of private jets. Quite how her thought-processes made a connection with a truly wonderful gentleman and her revolting exploits, only she will know.

All for climate change

Ms McFadden went on to claim that her actions did not “cause excessive damage or inconvenience” and made the point that she had actually made efforts to clean it up after filming. She said that Budd had been living in a caravan with a chemical toilet, so the substance was “readily available”. Attempting to somehow justify her clients behaviour, Ms McFadden said the intention was to draw people’s attention to the things that are going on in the world, and to try and make people feel something, and get a visceral reaction so that they might stand up and start to take notice of the climate crisis.

Sentencing Budd, District Judge Cieciora said: “You did what you did to cause the maximum amount of distress and outrage and I have seen a number of emails and statements that reflect the distress caused.” She told Ms Budd that she could see that the protester had clearly thought about what would cause the most amount of outrage and publicity.

However she went on to say that she reluctantly agreed with Ms McFadden that sentencing had to be independent and not based on public outrage. She also acknowledged that although the substance used was deliberately chosen as being the most demeaning and disgraceful, it was also a substance which could easily be cleaned, and mentioned that the cost of repair was reasonably low, at around £200. Speaking directly to Ms Budd and noting her young age and deeply held views on climate change, she said “I am just about persuaded that I can suspend your sentence.”

Speaking after her initial action last month Ms Budd, who is a former medical student, had said: “People are going to say that he is a hero, people are going to say that this is profoundly, obscenely disrespectful to his life, and to the NHS he stood up for, and I agree.” She went on to make a point that she was studying to become a doctor because she believe in taking care of people.

Then, in an attempt to vindicate her actions she added that if people believe in taking care of each other, and believe that NHS workers are doing essential work, then the healthcare system and civilisation should not be being forced into collapse, and the genocide of all humanity needed to be taken seriously.

Then turning her attention to the cause she was representing, she had a dig at the government for not ending UK private jet, before trying to excuse herself saying: “I did not do what I did to cause hurt and offence to the people who cherish his memory and it is really sad that it did that.”

How on earth she thought it would not do so is possibly a truer reflection on the individual’s grip on what is reality.

A true gentleman and national treasure

Captain Sir Tom Moore, was from Bedfordshire, and became a household name during the first wave of the Covid-19 pandemic when he set out to complete 100 laps around his garden, in a bid to raise money for the NHS. By the time he passed his 100th birthday, he had raised over £32 million.

He received over 150,000 cards to wish him well on his special day and his incredible spirit undoubtedly united the nation at a time of great stress and uncertainty. It culminated with the popular army veteran being knighted for his efforts by the late Queen Elizabeth II, at Windsor Castle in July 2020, before sadly he died after contracting the disease himself in February 2021.

Ms Budd received vitriolic condemnation for her disgusting act from all corners. She was branded an attention seeker, with many calls for her to be locked up and the key to be thrown away. Her lack of respect was the most common theme, with others questioning her mental health too. Also, many  wondered why she had chosen a sleepy Derbyshire village for her protest, as opposed to places where there were more prominent memorials to Sir Tom in big UK cities such as Leeds, or take her objections to an airport, where these private jets that offend her so much, are actually taking off from.

End UK Private Jets is a group protesting against luxurious and unnecessary carbon emissions, focusing on the use of private jets in the UK.