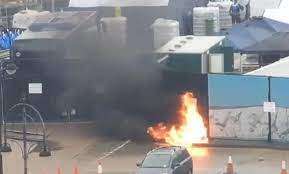 Emergency services rushed to a border force migrant processing centre in the port of Dover, Kent, shortly before midday on Sunday 30 October.

The Home Office facility at Manston, was believed to have been attacked by a man who witnesses say, threw three petrol bombs loaded with fireworks, one of which did not go off, before it is understood he headed to a nearby petrol station, where he is said to have killed himself.

All three emergency services in attendance

Kent Fire and Rescue Service was called to the incident in Dover at about 11:25 GMT, and were able to extinguish a fire that had taken hold. The South East Coast Ambulance Service confirmed they also attended the scene.

Kent Police would not confirm the reports that a man took his own life, simply stating via a force spokesperson, that they were called at 11:22 GMT and that officers had established that two to three incendiary devices had been thrown into a Home Office immigration premises. They said that one minor injury had been reported. They went onto say that the suspect had been identified and located and that inquiries into the incident would remain ongoing.

As of yet the Home Office have not released any official comment.

Reports that attacker has taken his own life not yet confirmed

The attacker, has been described as being a white man in a striped top, and seemingly he drove up to the centre in a white SEAT sports utility vehicle. After getting out of his transport he proceeded to throw the three petrol bombs at the complex, before speeding off to the petrol station a short distance away, where reports indicate that he tied an improvised noose around his own neck, attached it to a metal pole and drove off killing himself in an instant.

The centre is now cordoned off as a heavy police presence has flooded the area.

Record numbers arriving into the facility

Government figures released showed that nearly 1,000 migrants arrived in the UK via the port yesterday (Saturday 29 October), after crossing the English Channel. Massive queues of people could be seen waiting to be processed at the compound as a total of 990 arrived. That represents the highest number of arrivals in one day for a number of weeks, since in fact 1,295 arrived on 22 August.

Tentative figures suggest that so far this calendar year, almost 40,000 have arrived into the country after attempting the treacherous trip from the French coast, which entails crossing the world’s busiest shipping lanes in flimsy dinghies and other small and totally unsuitable boats.

Conditions at Manston have been described as shockingly bad with concerned officials stating that the site has already passed the point of being unsafe. It apparently was meant to hold somewhere between 1,000 and 1,600 people, but at the beginning of last week there was said to be 2,800 in the short-term holding facility, with increases daily.

The centre, which is a former Royal Air Force base, opened back in January this year with the intention of holding people for just 24 hours whilst checks are undertaken, prior to being moved into immigration detention centres, or asylum accommodation, which are basically hotels willing to take them.

However, at almost £6m a day this has enraged many British taxpayers, who are fundamentally footing the bill. It has been acknowledged that many of the migrants were being detained for unlawfully long periods, and kept in inhumane conditions, watched over by guards who are not trained properly and who do not possess any suitable qualifications to carry out the job.

Chief inspector of borders and immigration David Neal said just a couple of days ago that the capacity of the centre had clearly been outstripped and highlighted the wretched conditions that people were being expected to survive in. He detailed one particular family from Afghanistan who he said had been in a marquee for an unthinkable 32 days.

A small number of cases of diphtheria, which is a highly contagious infection and which can prove fatal if not treated quickly, have been reported on the site over the last two months. Voicing his concern, Mr Neal said: “It is a really dangerous situation which is failing to address vulnerability, there are considerable risks in terms of infection, medical needs, disorder and… fire.”

Too early to determine exact reason for attack

He could not have envisaged a crazed individual hurling petrol bombs into the complex, but it was obvious from his comments that things were not right. That does not in any way justify the actions of an deranged mad-man, but if somebody is unhinged and feel strongly about something and feel nothing is being done, they will often take matters into their own hands and commit inexplicable acts of terror.

It may be that this person had taken issue with the cost of keeping the asylum seekers, possibly the seemingly endless stream of them entering the facility, or just their very presence at the base. Perhaps he was just a troubled individual. No doubt clearer details will emerge in due course, but whichever turns out to be the motivation behind the attack, one thing is certain, something has to be done to improve the appalling conditions currently in operation at Manston.