3-year-old among three dead in Turks and Caicos shooting 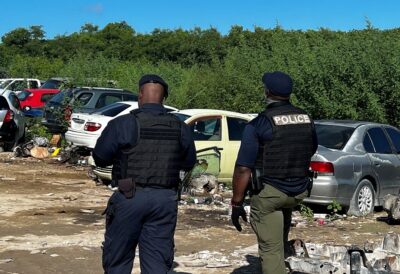 A three-year-old child is among those found dead following a shooting in Turks and Caicos Island. Three people died according to reports. Their dead bodies were found in a car.

Reports from the media there suggest that a 7-year-old girl was also in the car parked in the Dock Yard but she was alive. The girl was injured and is currently being treated at the hospital.

According to reports around 6.57 am on Monday the” Royal Turks and Caicos Police Force received information from its Police Control Room, that two adults – male and female, along with two children were bleeding heavily from gunshot wounds in a parked vehicle in Dock Yard”.

“RTCIPF officers arrived at the given location and found the lifeless bodies of the adults and a male child aged three. Another female child aged seven, who was also in the vehicle, was alive and taken for medical attention for injuries received”

Commissioner of Police Trevor said he was shocked by the incident and the circumstances “of what happened are now part of an active investigation. Such a vicious, barbaric act has no place in our communities and I condemn those involved. The criminals involved are in the minority and we need to all work together to bring them to justice; these criminals are heartless; they do not care about life.”.

He said lawmen will remain “focused and determined to bring the perpetrators to justice and we are being supported by colleagues from the UK, Bahamas, and the United States as we conduct robust and thorough investigations into recent violence on the Islands”.