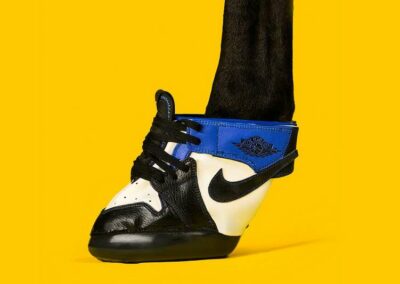 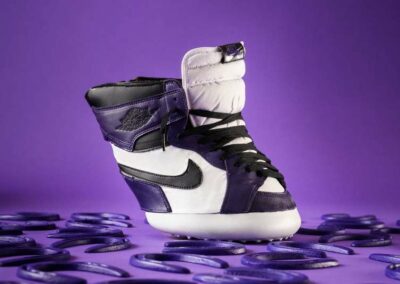 It is time for horse racing to begin. The spectators are seated. The horses have begun coming out from the tunnel, dressed in their country’s shirts with matching footwear on their feet. You might be wondering if something like that will ever be possible. No doubt, something of that nature is impossible, at least for now. However, something that appeared impossible has recently been introduced into horse racing. It is sneakers for horses.

Marcus Floyd, a Kentucky-based artist, has invented what he described as the “horse kick.” According to him, “horse kicks was founded to offer horses of all breeds and disciples the drip they deserve.”

Like a man walking comfortably in his sneakers, this amazing footwear will also give horses the same comfort, including when in a race.

How the sneakers are made

While there are the same basic procedures for making shoes for humans and animals, the procedure for the latter is no doubt more complex. Marcus Floyd, who described himself as a “lifelong sneakerhead,” said all the sneakers are handmade.

However, Floyd does not make the shoes from the scratch. He buys a pair of already-made shoes which he deconstructs and reconstructs. To make sure the design is accurate, he reassembles the deconstructed sneakers on top of a pre-made protective boot for horses. Constructing one shoe takes at least 17 hours.

“Horse Kicks are built on a pre-made protective boot designed for horses. While we view these pieces as works of art, Horse Kicks are 100% wearable,” he said on his website.

Floyd attended The Shoe Surgeon’s SRGN Academy, where he studied the art of shoe “decon/recon.” His love for sneakers has pushed him into making “a whole new genre of footwear never seen before in the sneaker game.”

A wide acceptance of the product

The acceptance of any innovation cannot be determined until the process is complete. The acceptance gained by the new design has wowed everyone, including the designer.

The pictures of the unique footwear shared on social media attracted massive commendation, which Floyd said gave him some relief.

“I don’t think any one of us realized that it would take off to the magnitude that it did,” Floyd told CNN. “As an artist, I feel like a sigh of relief.”

On November 12th, the VisiLex horse sneakers will be auctioned at a fundraiser event for charities in Kentucky, starting at $1,200. Floyd said, “10% of all future Horse Kicks proceeds will be donated to Sneaker Ball Lex Charities.”