Church service in NY to celebrate Antiguans and Barbuda’s Independence 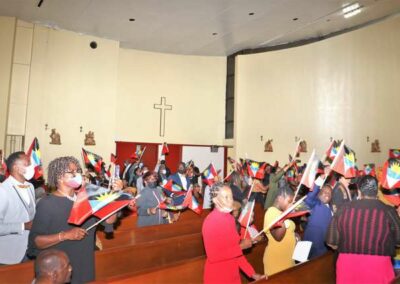 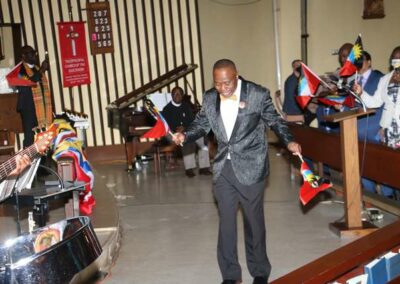 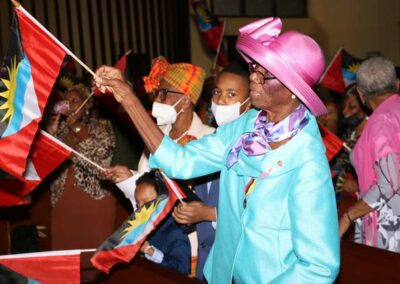 The Church of the Crucifixion in Harlem erupted in joyful praise as flags were raised high by an appreciative congregation of Antiguans and Barbudans attending the Independence Service of Thanksgiving this past Sunday.

Pews were filled this year as compared to last year when the service had to be held remotely due in large measure to the pandemic.

The City South Steel Orchestra was out in its numbers and together with the voices of the Antigua and Barbuda International Chorale, they led the congregation in the singing of their favorite patriotic songs.

A message from Prime Minister Gaston Browne was delivered by Antigua and Barbuda’s Permanent Representative to the United Nations Ambassador Walton Webson.

In his message, Prime Minister Browne reflected on the progress that Antigua and Barbuda has made since the twin-island nation gained its Independence 41 years ago.

He addressed the challenges that were brought on by the Covid-19 pandemic and the skillful management of the economy by his government to ensure the country survived a painful crisis.

“Covid-19 impacted our growth in 2020 since borders were closed to prevent the disease’s spread. Nevertheless, the current administration has been spectacular in its many achievements,” Ambassador Webson read.

Prime Minister Browne thanked Antiguans and Barbudans in the US who continue to support the overall development prospects for Antigua and Barbuda even as they continue to live away from the land of their birth.

In his sermon Canon Franklin Reid, who served the Anglican communion in Antigua and Barbuda for many years, while asking the nation to pray for its leaders also prevailed upon citizens the need for unity, love and respect for each other.

The service was officiated by Rev. F. Craig Henry and members of the Antigua and Barbuda Offices in New York played prominent roles. Marketing Officer of the Tourism Authority Carolyn Punter rendered beautifully in song while lessons were read by AOSIS Programme Administrator JerriAnne Jeremy and Adviser at the Permanent Mission Javier Spencer.

A vote of thanks was delivered by Consular Officer Joy Wehner. The next major activity for the Antigua and Barbuda Mission is its annual Independence Gala, which was also on hold due to the pandemic.

It will take place next Saturday at Mulino’s Lake Isle Country Club at 8pm featuring the original Burning Flames.