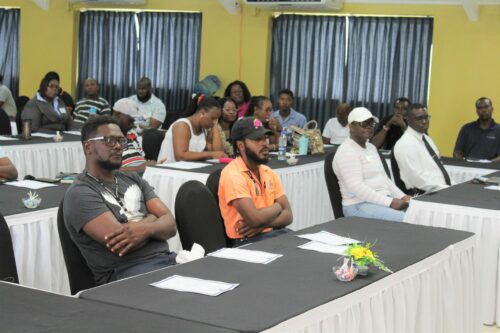 More than eighty Shop Stewards on the island will receive certificates after what The Antigua and Barbuda Workers’ Union said was one the largest gatherings to take place in Antigua.

These men and women were part of a two-day training workshop on Wednesday 26, and Thursday 27 October 2022, an activity, designed to strengthen capacity and build solidarity among both new and experienced Shop Stewards.

ABWU General Secretary, David Massiah, told participants that the Union’s strength depended on the engagement of every Shop Steward.

“We as officers do not have all the knowledge and information; but coming together, we all can be a force to be reckoned with at the end of the day,” Massiah said.

Massiah also encouraged participants to follow international developments in the world of work. He warned too, of significant changes that will impact the workplace as many countries – including Antigua & Barbuda – prepare for a transition to green energy.

Meanwhile, Industrial Relations and Training Officer at the ABWU, Hazel Luke, described the workshop as a resounding success.

“We have brought together over 95% of the Union’s Shop Stewards, and I think it augers well for the future of this organization. Not only are they better equipped in their roles, but this workshop has also created a platform for future engagements with our Shop Stewards,” Luke explained.

The workshop featured presentations on Divisions “C” and “D” of the Labour Code, as well as lectures on Collective Bargaining and Leadership. There was also an exploration of the Shop Steward Guide Book, written by the late Sir. Keithlyn Smith.