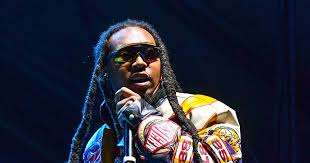 Influential hip-hop rap artist Takeoff has been tragically shot dead in what has been described as a “stray bullet” incident, which happened at a bowling alley in Houston, Texas at around 02:30 local time (07:30 GMT), on Tuesday 1 November. The popular Migos band member was on a balcony outside the 810 Billiards and Bowling Alley, where he had reportedly been playing dice with his uncle and long time bandmate, Quavo.

It is understood that in the region of 40 to 50 guests had been at a private party when somebody opened fire indiscriminately. When the police arrived, officers found a man with a gunshot wound to the head, or neck and he was pronounced dead at the scene. Two other people, a 24-year-old man and 23-year-old woman, also received injuries, and were subsequently taken to hospital in private vehicles. As of yet there have been no arrests reported.

Just a few hours earlier the 28-year-old Takeoff had released his latest music video. Houston Police Chief Troy Finner, refused to speculate as to whether the star was an actual target, or just incredibly unlucky; but others have indicated that it did not appear as if he had been singled out, and was just sadly in the wrong place.

Chief Finner said he needed to wait for the official findings from the investigation that had begun immediately, but added that based on what he had been told, he did not expect to discover that Takeoff was involved in anything criminal, and from what he could establish, the rapper was a well respected, very peaceful, and basically just a great entertainer.

He then pleaded for witnesses to come forward with any information that could help them with their enquiries, to allow some closure for his family, who he said were naturally deeply shocked by the events. At a hastily arranged press conference, the Chief said at least two firearms were involved, before concentrating his thoughts towards Takeoff’s mother, who had now flown to the scene. “I want everybody to understand the pain, and the intense suffering of a mother, who we all pray for, along with his family and all of his friends, who are in deep pain and shock right now.”

Takeoff, whose actual name was Kirsnick Khari Ball, was born in 1994, in Lawrenceville, in Georgia State, and was the youngest of the trio who made up the chart-topping Atlanta band Migos, along with his Uncle Quavo and cousin Offset. Their hits include “Walk It Talk It”, “Stir Fry” and “Versace”. In 2016 they achieved mainstream success with “Bad And Boujee”, a single that topped the US charts and was nominated for best rap performance at the Grammy Awards.

Their own original style

Originally called Polo Club, before switching to Migos, the band’s music had “offered the three of them an escape route from poverty”, that was what Takeoff had once said in an interview. They invented a specific style of rapping that became known as the “Migos Flow”, which essentially was a technique of rapping in short, choppy, quick-fire staccato triplets, which changed the sound of popular music in the 2010’s. It had an urgency and ebullience to it that made it instantly stand out from similar artists. The likes of Kendrick Lamar, Kanye West, Drake, and even Ariana Grande have used the style successfully in some of their music.

Continuing to achieve success as a duo

Although Offset parted ways with the band earlier this year, Takeoff and Quavo continued as a duo, going public with their album: “Only Built for Infinity Tracks”, just last month. Then, literally hours before the tragedy, they released a Halloween-themed video for one of the tracks off the album: “Messy”.

Paying a heart-felt tribute, his record label: “Quality Control” said that they were devastated. In a statement they spoke of their deep sadness at the senseless loss of their beloved brother – Kirsnick Khari Ball, and asked for respect to be shown to his family who were in their words: “Continuing to process the monumental loss.”

Tributes from within the industry

Further tributes have poured in from friends, collaborators and fans alike. Drake wrote: “I got the best memories of all of us seeing the world together and bringing light to every city we touched.”

Gucci Mane, who recently collaborated with Takeoff, shared a photo of the rapper on Instagram, simply saying “broke my heart”.

It is clear how popular the artist was and the deep sense of loss being felt all around the world. Maybe one day something will finally be done about gun-crime in the US, but then again… probably not.