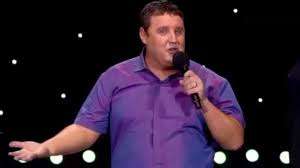 Fans of much loved comedian Peter Kay have been celebrating the news that he will return to performing his hilarious stand-up routines from next month. His announcement that he will set off on his first live tour in 12 years is set to spark a frenzy of activity, when tickets go on sale on Saturday 12 November.

The popular 49-year-old comic has been absent from the limelight ever since he cancelled his 2017 tour, completely out of the blue, due as he said at the time, to “unforeseen family circumstances”.

Although rumours have been flying around of an impending statement confirming a new tour, when it actually came it still was something of a surprise, but was greeted across the country by his legions of devoted admirers with obvious delight. In a very brief press release the hugely entertaining performer said: “It is good to get back to what I love doing best, stand-up comedy.”

Tickets to be sold at bargain prices

Highlighting the cost of living crisis and all that is going on in the world today, the Bolton-born funny-man confirmed that ticket prices would be set at a starting price of just £35, which was the very same as they were back when he began his previous tour, way back in 2010. That tour broke a Guinness World Record, becoming the biggest selling stand-up tour of all time, playing to an astonishing 1.2 million people, over its entire duration. He went on to say: “If there has ever been a time that people need a laugh it is right now.”

He had been due to start a 100-show live arena tour in April of 2018, but in December 2017 he shocked fans by calling off the whole tour, sending his sincere apologising to those who had purchased tickets, insisting it wasn’t a decision that he had taken lightly, but hoped that everyone would understand that he had to put his family first. In a statement at the time he said: ‘Due to unforeseen family circumstances I deeply regret that I am having to cancel all of my upcoming work projects.”

The Lily Foundation close to his heart

No further details were given at the time, but just a month before the tour should have begun, he broke his silence in the March of 2018. In an enlightening tweet he spoke about a charity night to raise awareness of mitochondrial disease through “The Lily Foundation” who he said were an inspiring charity that helps to improve the lives of children with the condition. He added: “I have had first-hand experience of the Foundation’s work and I am proud to raise both awareness and much needed funds.”

What is mitochondrial disease?

Mitochondrial disease is a term which covers a range of often devastating conditions involving the failure of mitochondria, which live inside cells. They have a key function as they provide energy to cells, and if they cannot do that it leads to grave problems for the body, affecting the nerve and muscle functions.

“One of the nicest people”

The clever observational comic kept a low profile thereafter, only returning to the stage for an occasional charity event, particularly one he got personally involved with in August of last year, for a 20-year-old at the time, Laura Nuttall. She had an aggressive type of brain cancer called glioblastoma multiforme.

Just last week he took Laura and her family for lunch, prompting her mother, Nicola, to tweet: “Laughter won’t cure glioblastoma, but it’s definitely a good distraction for a couple of hours.” Before going on to describe Peter Kay as: “the nicest, most thoughtful, and naturally hilarious person”, who she said they felt lucky to have as a friend.

One success after another

His career is littered with outstanding successes, from his 1998 nomination for a Perrier Award at the Edinburgh Fringe Festival for his ground-breaking stand up show, on to “That Peter Kay Thing” followed by the fantastic spin-off series “Phoenix Nights”; then the subsequent spin-off of that in the shape of “Max and Paddy’s Road to Nowhere”. He continued with winning formulas in “Car Share” and “Cradle to Grave”.

However, it is his hysterical comic routines which everyone can relate to in some form or another, that has made him the nations favourite.

Recently there have been mutterings that he has been performing secret gigs to very small audiences at The Lowry Theatre in Manchester, testing out new and unpolished material ahead of a possible tour.

Tour dates confirmed with without a London gig

Well now that tour has been confirmed as happening and will kick off on 2 December at the Manchester AO Arena,  before heading to Birmingham, Liverpool, Leeds, Belfast, Newcastle, Glasgow, Dublin, and Cardiff, before finishing on 11 August at the Sheffield Utilita Arena.

Somewhat surprisingly, no London dates have been listed, although there are spaces that can be filled in with additional performances, and of course he could easily extend the tour beyond August, which would not be any great shock, such will be the demand.

Happy at home with family

Despite a reported wealth of around £43 million, he still lives in his home town, and has always put a massive importance on family, almost always in the past choosing to avoid parties and red carpets in favour of time at home with his wife, Susan and their three children.

Now it seems though that he is ready to unleash his fabulous humour on the nation once more.