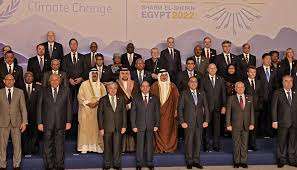 ​Once again world leaders (around 120 of them) have gathered for a Conference of the Parties, which is better known as COP27, where discussions and commitments are made in relation to climate change. The very future of the planet could hinge on decisions that are made and acted upon over the next 12 days.

Few need telling that heatwaves, floods and droughts around the world are increasing, with gas emissions on the rise. However, with this taking place against the backdrop of the war in Ukraine, the meetings are almost certainly going to be confrontational, with some harsh words delivered; and Egypt, the host, wanting to focus on how promises made previously, can now be brought to implementation.

The summit will run from 6 to 18 November and all in attendance do appear to accept that something has to be done, but depending on where in the world individual representatives are from, and what their financial standing happens to be, will have a significant bearing on commitment and attitude. The target is to limit warming to a manageable 1.5C by 2100, which scientists have repeatedly stated as being crucial to avoid the worst impacts.

Several big players not in attendance

Notable absentees are the heads of China, Russia, and India. Missing from the opening day also was Joe Biden, but the US President is due to make an appearance on Friday 11th. Pledges made in Glasgow last year at COP26, such as the phasing down on the use of coal, ending of deforestation, and cutting methane emissions, have been halted before even getting going, largely due to events in Ukraine, and what is hoped is that over the next couple of weeks, these and other initiatives, can be put back on track.

Weather patterns continue to change for the worse

The earth is now approximately 1.1C warmer than it was in the 19th Century; plus the amount of CO2 in the atmosphere has risen by almost 50%. Although not sounding a great deal, it is having the effect of creating far hotter temperatures over sustained periods, allowing storms to be significantly more intense, as well as melting polar ice which is causing sea levels to rise, particularly worrying for Island states, and contributing to droughts in places where they have previously never occurred.

UK have a double hand

Whist some hugely influential nations are not represented, the UK has turned up with not only the current Prime Minister, but also one removed from office several months ago. Rishi Sunak had initially indicated he would not be attending, but had a change of heart, which could have had something to do with the fact that Boris Johnson received a personal invite from the Egyptians, and was only too willing to accept.

He was one of the first to speak and demonstrated his usual exuberance, referring back to last year which he said was a high point in the struggle against climate change: “I am the spirit of Glasgow” was his opening remark. He then spoke of the Russian invasion and of how much that had slowed any progress, saying that commitments made were one of the most important collateral victims. He reminded everyone that at COP26 it was said that the developed world would come up with $100bn a year, but that figure was way off at the moment, he said.

Then in his typical fashion he declared: “This is the moment to put the electric throttle to the floor and not give in to Putin’s energy blackmail.” He told the conference that the UK are now not only helping people with the cost of energy, but were making sure that it could never again be so vulnerable to sudden gyrations in the price of gas, by taking steps to among other things: putting in 50 gigawatts of wind power by 2030, and building a new nuclear reactor every year, rather than every 10 years, as first planned.

He justified his attendance by proclaiming that he is a “foot soldier and spear carrier of the Conservative Party, purely in a supportive role to remind the world of what we did in Glasgow.” He couldn’t resist a little dig at the end of his time on stage, aimed at those who forced him out of his position earlier in the year, when he recalled how temperatures in London reached an “almost unbearable” 40C in the summer. “Perhaps that could have contributed, who knows, to unexpected political turmoil that we saw in Westminster at the time” he said, desperately trying not to smirk too much.

Tough talking from the UN

The UN Secretary General António Guterres followed Mr Johnson on to the stage and began by dramatically stating that “The clock is ticking and we are on a highway to climate hell with our foot still on the accelerator”, pointing out that people are currently involved in a losing fight, and that the planet is at tipping point, where unless action is taken immediately, the climate chaos will be irreversible. He stressed that loss and damage could no longer be swept under the rug. He called for a universal early warning system within five years and for governments to tax the windfall profits of fossil fuels companies.

Barbados PM Mia Mottley began her address by saying that she did not need to go over the horror and the devastation wreaked upon Earth over the course of the previous 12 months; but highlighted the apocalyptic floods in Pakistan, and the heatwaves from Europe to China, and mentioned the devastation in her own region caused in Belize by tropical storm Lisa, and the torrential floods in St Lucia. She said: “We need to understand why we are not moving any further forward, as we have the collective capacity to transform.”

The President of Senegal and of the African Union, Macky Sall, made a telling statement in which he made the observation that COP27 was an opportunity for both developed and developing countries to either “make history” or “be a victim of history”. Continuing, he remarked that Africa was a force driving low carbon development, despite the fact that the continent contributed less than 4% of global greenhouse gasses. He added that it was those who pollute the most who should pay the most, in order to get the planet the track of climate crisis.

Representing an African Group of countries, Kenya’s president William Ruto, said that humanity is confronting “unprecedented devastation on a global scale”. He explained that as many as 700 million people in Africa will be displaced due to water stress by 2030. He outlined the impact of climate change on the continent announcing that over 2.5 million livestock have died in his country in this year alone, and reminding everyone that loss and damage are daily experiences for millions of Africans. Forcefully expressing past frustrations he said: “We cannot afford to spend more time skirting around the real issues and we must break out of the open-ended discussions we are trapped in.”

Wavel Ramkalawan, the Seychelles President asked for concrete actions to emerge from the conference instead of another set of promises that take far too long to materialise. He extended his support and solidarity to all of the nations that have experienced the terrible effects of climate change.

He pointed out that the Seychelles’ contribution to the destruction of the planet was minimal, but they suffered more than most with their islands disappearing and coastal areas under threat. Despite that fact, he said his country was pledging to further contribute to the protection of all its carbon-abosrbing mangroves and sea grass meadows by 2023, and said that his wish was that everyone could leave Sharm El-Sheikh with “a peace pact with our planet”.

French President Emmanuel Macron said that the world should not sacrifice its climate commitments just because of Russia’s aggression against Ukraine. He understood that the conflict would lead many to say they have other priorities to focus on, but insisted that there must be a transition in economies away from coal and that helping developing countries to do so had to be a priority.

He stressed that in his opinion nature was the best ally to achieve targets, explaining that the countries that have biodiversity reserves, marine or land-based, have incalculable carbon resources, and that they had to be a focus for the bigger countries to help bring those nature-based solutions to the fore.

King encouraged as his country recovers from tsunami

Speaking on behalf of the Pacific nation of Tonga, King Tupou VI spoke of how his country wishes to prioritise policies that focus on both disaster risk management and tackling climate change, in the aftermath of the tsunami that hit his island nation in January of this year. He commented that they could not face the challenges ahead on their own, but was encouraged by the agenda at COP27 saying that the events of the summit will be a testament to the genuine partnerships of all parties to achieving the necessary goals.

Finally, Mr Sunak arrived late in the day to deliver his first international speech since becoming the UK Prime Minister. Similar to Mr Johnson, he started by referring back to COP26 when he said he believed there had been room for hope after Glasgow, and that the question was whether there was the collective will to deliver on commitments; which he felt there was.

He accepted that the pandemic had all but broke the global economy, but made it clear that the UK would stand by its promise of £11.6bn in climate finance, because he said it is not just morally right, it is also economically right as climate security goes hand-in-hand with energy security. “I profoundly believe that is the right thing to do”, he said.

He informed those present that the UK is investing in new green infrastructure, including helping developing countries deliver a “fast track to clean growth”. He finished by insisting that there was room for genuine hope, and asked everyone to come together to fulfil it.

Money or lack of it will be the key

Twelve months ago the world looked very different, there were some ambitious plans laid down, which for whatever reasons have not been carried forward. The early signs from those that have spoken is that there is a determination to try and get things back on track, but as always it will be money that talks the loudest.