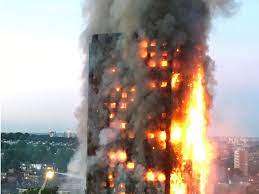 The public inquiry into the horrific and devastating Grenfell Tower fire has finally come to a close, with a string of scathing attacks by those leading the investigation. Companies and organisations involved have all been slated for their parts played in one way or another, which led to the events that had catastrophic consequences in the high-rise block in north Kensington, west London, back on 14 June 2017, which tragically saw 72 innocent people lose their lives.

Grenfell Tower was part of the Lancaster West Estate, a social housing complex of almost 1,000 homes. The tower was built in the 1970’s, but had just a year before undergone extensive £8.6m renovations and refurbishment, being completed in the May of 2016. Work undertaken included new exterior cladding, replacement windows and a communal heating system.

The bottom four floors were also remodelled, creating seven additional homes and improvements to communal facilities. There were in total 129 flats, across 21 residential floors, with three levels of mixed usage. The tower was managed by the Kensington and Chelsea Tenant Management Organisation (KCTMO), on behalf of the local council.

It was around 1am when a small electrical fire broke out in the kitchen of a fourth floor flat. The occupant immediately rang the fire brigade for what ought to have been a relatively straightforward containment and extinguish call. However, it very quickly became apparent that this had developed into something far worse, as literally within minutes the blaze had raced up the exterior of the building and then spread to all four sides, and very soon most of the upper floors were well alight.

Barrister lays into companies associated with the building

Leading barrister Richard Millett KC, in a highly critical summing up, told how the risks were “well known” and that the shocking and devastating spread of the fire was down to a combination of “incompetence”, “cynical and very possibly dishonest practices” in the building industry, “weak” building controls, negligence on the part of the London Fire Brigade to learn lessons from previous fires, and a basic failure of government.

He reminded the inquiry chair Sir Martin Moore-Bick, that firms involved in all aspects of the building and ultimately the fire itself, had repeatedly denied responsibility. In a cynical and disparaging attack on those companies, the KC begged the question: “If everything that has been said is correct, then nobody is to blame for the Tower fire.” He then stressed that of course that could not be true and that it was shameful that nobody was willing to shoulder responsibility. He pointed out that the grieving families and survivors of that nights events did not want to hear that it was just a “terrible accident”, as it very clearly was not.

Blame avoidance rather than accepting responsibility

Mr Millett said it was more a case that there are so many to blame, that no one individual or organisation wanted to be singled out. He also accused those under scrutiny to be simply “indulging in a merry-go-round of blame”, instead of recognising that a tragedy of the dimensions involved should have provoked a strong sense of public responsibility.

Instead, he said, many “core participants appear simply to have used the inquiry as an opportunity to position themselves, so as to minimise their own exposure to legal liability”.

He finished by instructing the hearing that, based on all of the evidence heard, the panel should conclude that each of the 72 tragic deaths were “avoidable”.

Who are the companies in the firing line?

Among those with the finger of responsibility firmly pointing at them are:

Arconic Architectural Products who were the cladding manufacturer, who marketed the cladding, in full knowledge that it would be used on tall buildings, despite having test evidence which indicated that it might be unsafe for this purpose. They have attempted to deflect the responsibility towards the architects and construction firms, who they argue should ensure any materials used are suitable.

Rydon, who were the building and design contractor for the tower’s refurbishment who had to have known that the cladding was highly flammable. They say they were never warned and were reliant on experts who never alerted them to the danger.

The Royal Borough of Kensington and Chelsea (RBKC) and its tenant management, who as local council, is accused of cutting costs and using non-fire retardant cladding simply because it was cheap.

Harley Facades who were the contractor who fitted the cladding and deny knowing that it had failed previous fire safety tests.

Exova were the fire safety consultancy company that seemingly advised that the cladding would have no adverse effect on safety in a report during the early planning stages for the redevelopment. They deny having any say in the decision to use the highly dangerous material.

Playing the system for financial gain

Mr Maxwell-Scott KC addressing the inquiry panel said that not only were the systems in play deeply flawed, but corporates working within that system appeared to have actively sought to take advantage of those flaws to their own advantage. He added that there was a need for “robust recommendations to address deep-rooted systemic problems” to ensure that when people design, construct, and refurbish buildings in future, a similar disaster could never happen again.

Faulty appliance was the cause of the fire

The actual appliance responsible for starting the fire was a fridge-freezer, a report written by Dr Niamh Nic Daéid, director of the Leverhulme Research Centre for Forensic Science at Dundee University, concluded. It was in flat 16, occupied by Behailu Kebede, who luckily managed to escape the building and has since described being woken by the sound of a smoke alarm and on investigation discovered smoke near to the kitchen window.

Firefighters arrived at the scene within five minutes of receiving the call, but unbeknown to them the fire had spread to the external parts of the building, within 15 minutes of the initial alert. Mobile phone images taken by Mr Kebede from outside the tower approximately 11 minutes after his first emergency call, show an orange glow of flames around the kitchen window, and later a fire burning more intensely in the area of the window filler panel and extractor fan.

In a subsequent report, fire expert Professor Luke Bisby expressed his view that the likely reason for the fire spreading beyond the kitchen was that flame and hot gases penetrated the internal window frame.

Flames at the top floor within half an hour

The fire spread with incredibly rapid speed, upwards and across the eastern side of the building, before leaping across the north face of the tower. Video footage showed the blaze had reached the top floor less than 30 minutes after firefighters had arrived and less than half an hour after that, the London Fire Brigade declared it “major incident”.

TV images showed residents at their windows, obeying the Grenfell Tower “stay put” fire policy, which basically worked on the principle that the building design would contain a fire in a single flat, removing the need for full evacuation. For that reason many stayed behind locked doors, unaware that the blaze had become out of control with thick poisonous smoke filling the single narrow stairwell. Those that ignored the policy, were the ones who managed to get out alive.

Completely engulfed many did not stand a chance

In desperation, many had believed climbing up would be a safer option, but sadly this was the worst thing they could have done and in total 24 people died on the top floor of the tower block. Just over three hours after the alarm was raised, the entire tower was engulfed, with more than 100 flats on fire and the blaze did not burn itself out until just after 1am the following day, exactly 24 hours after the firefighters first arrived.

Cladding material the primary cause for fire spreading so rapidly

Professor Bisby concluded that evidence strongly supported the theory that aluminium sheets bonded to a polyethylene core on the external cladding, were the primary cause of the fire’s rapid spread, as this material incorporates a highly combustible filler which melts, drips, and flows at elevated temperature, releasing huge amounts of energy, if combusted.

Additionally, the building’s smoke extraction system was not working, and a water-filled pipe that towers of that nature should have and which run up the building to be used in the event of fire, were absent and consequently hampered efforts to extinguish the fire internally.

The first thing that the bereaved, survivors, and residents are seeking, and the very least they should expect, is an “unequivocal, unambiguous, and forthright apology” from companies implicated in the fire; but they have said they will not be satisfied until those responsible are sent to prison. Arconic certainly seem to be heavily in the firing line, but equally there appears to be a cumulative involvement in a horrific incident, that so sadly could it seems have been easily avoided.

The Metropolitan Police are looking into offences including manslaughter, corporate manslaughter, misconduct in public office and breaches of fire safety regulations in relation to the fire. However, decisions on any prosecutions are not expected until the end of next year at the earliest, because the police want to see the inquiry’s report first and consider its conclusions and recommendations, with that is not expected to be published until the middle of 2023.