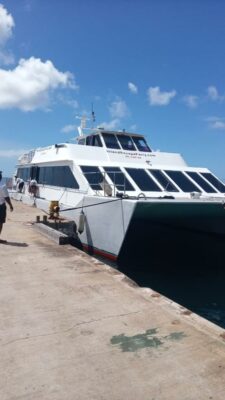 Luxury ferry Island Escape has stopped operations from today Friday, saying that it can no longer afford to operate in the market because the conditions are just too unfair. The boat transports passengers between Antigua and the sister isle, Barbuda,

According to reports, the central government inadvertently caused in granting duty-free fuel to its competitors years ago, who have now subsequently brought in two more boats to transport people between the islands.

The owner Captain Mark Rosandich, said he just cannot make it work having spent a half million dollars on new engines, with the current price of fuel, without a duty-free concession “as our competitor enjoys, compounded by the arrival of their new ferry/cargo boat Leeward Express into the market while we were repowering”

He said the route cannot support a 150-passenger ferry as nice as the “Island Escape” is.

“Captain Mark Rosandich, says this is most unfortunate, “having done our homework had we been able to add Montserrat a few times weekly to our schedule the decision to seize operations likely would have been different.  It’s all about the economics”

He said the plan is to continue the construction of a new highspeed luxury 60-passenger ferry “EDGE” and will hold a shingle out for early 2023 to see what happens.

“My glass is always half full, not half empty,” he added.