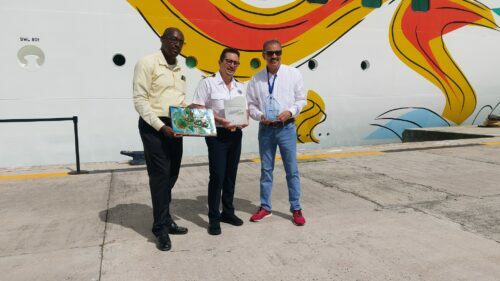 Tourism Minister Charles Max Fernandez says the partnership with Global Port Holdings is beginning to bear fruit. Fernandez was speaking on the heels of the inaugural call of Norwegian Getaway on Saturday.

The vessel brought almost 5000 people to the shores of the twin-island nation which include over 3300 passengers and close to 1600 crew members.

As customary on inaugural calls, there was a special welcome and an exchange of keepsakes.

“It shows the importance of the partnership between GPH and the government of Antigua and Barbuda that we are able to attract new cruise lines back into the country, “Fernandez told reporters at the Heritage Quay on Saturday.

He said the Norwegian Getaway will continue throughout the cruise season.

“We have been working seriously in trying to bring first-time vessels to our shores and we have been successful in arranging with Norwegian for them to put this on their itinerary. The beauty about it is that this vessel will now go all the down until April. Just about every ten days this vessel will be calling with us,” he said.

The ship’s captain Luigi De Angelis expressed his delight in taking the vessel into St Johns for the very first time.

“I felt very welcome. Safe harbor, professional people. Good docking for the vessel is what the captain cares about the most.  But most of all it’s a very nice thing to be in Antigua,” he said.

He also welcomed the dredging work currently ongoing in the St Johns habour, telling reporters that there has been improvement since he came to the island with another vessel some six ago.

“My last time in Antigua was six years ago, with a different ship, with a different cruise line and I really found the place to be completely changed for the good. Dredging the harbor is safer for the vessel…there is now room for little mistakes to be allowed. That makes a big difference for navigating the vessel,” he added.

A couple from Missouri who was visiting for the first time told State TV that they were happy to be in a place that is a lot less cold, saying that they intended to “shop around and see what’s around”.

Meantime Fernandez says the season is looking very good for all those in the sector, especially the taxi operators who have been lobbying for years for an increase.

“Next month we will have 75 calls in Antigua. As far as I know, it’s a record for us. January is going to be very close if not better than that. This season is looking very good. I am happy for our taxi operators…”, Fernandez said.