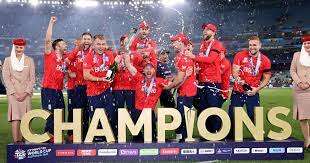 England have beaten Pakistan by 5 wickets to lift the Twenty20 World Cup, in a low scoring contest at a packed out Melbourne cricket ground, and in so doing became champions for a second time, having won the tournament previously, back in 2010.

Almost predictably the man who hit the winning run was Ben Stokes, who had suffered at the conclusion of the 2016 final at Eden Gardens in Kolkata, when he was hit for four successive sixes in the last over by Carlos Brathwaite, as the West Indies broke the English hearts to snatch victory.

This win, owed much to some outstanding bowling by Sam Curran and Adil Rashid, and it also means England have become the first team to hold the men’s 20 and 50-over world titles at the same time.

Batting first, Pakistan never really got going, losing wickets at crucial times and on a tricky pitch their normally brutal opening pair of captain Babar Azam and Mohammad Rizwan were unable to escape the English stranglehold.

Wonderful spells by Curran, who took 4 for 12, and Rashid 2 for 22, including a fabulous wicket-maiden – something almost unheard of in top class T20 cricket – really tightened England’s grip. They lost seven wickets for 53 runs in the last nine overs of their innings.

Shan Masood tried to rally his troops with some elegant stroke-play and was highest scorer with 38, but after he clipped Curran to deep square leg in the 17th over, nobody else was able to have any impact thereafter, and his team limped to 137 for 8 in their 20 overs, which looked to be well short of a competitive total against an England side packed with big-hitters.

However, backed by their fanatical support, who made up the majority of the massive 80,000 plus crowd, the Pakistan quick bowlers tore into their opponents and had them at 45 for 3 and then 84 for 4 with overs ticking away.

The game swung England’s way, ironically at the fall of their fourth wicket when, in taking a straightforward catch at long-off to dismiss Harry Brook, star bowler Shaheen Afridi injured himself and was unable to bowl his fourth and final over.

Step forward Ben Stokes, sensing an opportunity he set about the Pakistan bowlers and wrote another chapter into his ever increasing English cricketing folklore, to power his way to 52 not out, with valuable assistance from Moeen Ali, as England won the game with an over to spare.

Man of the match disputed

Stokes could probably consider himself a little unfortunate not to be named player of the match as he effectively wrestled the game back into England’s control; but that honour went to Curran, who also secured the player of the tournament award for a series of stunning performances, and here again his array of slower yorkers and bouncers proved almost unplayable.

Paying tribute to his captain Jos Buttler, Stokes said his skipper had created his own legacy and had crucially got 95% of his tactical decisions right. Humbly deflecting any praise away from himself, he preferred to acknowledge to contributions of Curran and Rashid, but he did admit to feeling very proud, saying: “You don’t get to win World Cups too often, so to win two of them is pretty special.”

Speaking about the run chase he said he always felt that it was in their own hands after the excellent performance by the bowlers in restricting Pakistan to such a modest total. “It was never panic stations and when Moeen came in it went to a run a ball.” He said he never felt any particular pressure, stating that he would rather be out in the middle able to influence the outcome, rather than sat on the sidelines. He concluded by saying: “I feel really good; it has been an amazing night.”

Buttler speaks of pride in his players

Captain Buttler said it was an unbelievable effort from everyone to win the game and he was immensely proud of the group of players. He admitted it was far from easy but always felt they were in control and while ever Ben Stokes was in, he was always confident. “He is the ultimate competitor in anything he does and can take a lot on his shoulders,” was his glowing assessment of his world-class teammate.

He said it had been a fantastic tournament. He also singled out the impact of coach Matthew Mott praising the way he has fitted in and given the players freedom to express and trust in themselves.

The head coach expressed his delight and said it was a very special moment for him, explaining that he was keen for the players to put on a show and enjoy the game and he felt that was precisely what they had done. “The boys held their nerve”  he said; before admitting that Stokes was the one player any team would want to have in the situation the team found themselves in.

“He is a match-winner in every tournament and he steadied the ship and really delivered tonight.” He thanked the Pakistan crowd for creating an unbelievable atmosphere in the ground and he also reserved praise for Curran saying the bowler had been “a revelation”.

Player of the tournament Curran was proud to receive the award, but felt Stokes had done enough to be given player of the match here. “This is very special, but I don’t think I should be getting this the way Stokesy played out there.” He added that the match-winner was somebody he had always looked up to, saying he is “an incredibly special player.”

Beaten captain Babar Azam sent his congratulations to England, graciously admitting that they deserved their victory. He said he was proud of the way his team had bounced back from losing the first two games of the tournament, and thanked the crowd for their incredible show of support.

He said he felt they were about 20 runs short of a par score, and as a consequence they were always up against it, but thought with one of the best bowling attacks in the world  they still had a chance. Sadly that changed with the injury to Afridi which swung the game England’s way. “We started well, but unfortunately Shaheen injured himself and without that happening maybe it is a different result, but it is part of the game.”

England won the match by 5 wickets.