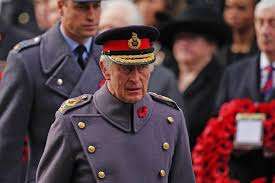 For the first time, in what must have been a really emotional moment, King Charles III led his nation’s tributes to their fallen heroes, as he laid the first wreath at London’s Cenotaph on Remembrance Day, when the servicemen and women who have lost their lives in past conflicts, are honoured.

This followed the national two-minute silence that as always was impeccably observed, when the now fully renovated Big Ben struck at 11.00am, in its official return to use after five years of repairs.

As thousands of people lined up along Whitehall for a watching brief, King Charles III must have had one extra person on his mind as he laid the new wreath which he has had designed, in honour of all those who died in action during the two world wars, and the 12,000 British servicemen and women who have been killed or injured, since 1945.

He has represented Queen Elizabeth II at the last five Cenotaph services and laid a wreath on her behalf, as she watched from the Foreign Office balcony that overlooks the Cenotaph. This was his first as the reigning monarch, so it would only be natural for him to spare a thought for his late mother after her death just two months ago.

His ring of poppies incorporated a ribbon of racing colours of scarlet, purple and gold in a tribute to the ones used by the Queen, as well as his grandfather, King George VI. They are mounted on an arrangement of black leaves, as is traditional for the Sovereign.

Other royals, including the Prince of Wales, the Earl of Wessex and the Princess Royal also laid wreaths, along with the Prime Minister and other senior politicians.

Queen Consort watches on as her wreath is laid

The Queen Consort viewed the Service from the balcony of the Foreign, Commonwealth and Development Office building. For the first time, a wreath was laid on Her Majesty’s behalf, by an Equerry from the Royal Household. Both the King’s and the Queen Consort’s wreaths have been produced by the Poppy Factory and were accompanied by handwritten cards bearing their new cyphers, which have recently been made public.

Respects paid by many other countries from Caribbean, Asia, and Africa

Finally to finish the formal wreath laying, Ambassadors from Ireland and Nepal, together with chiefs from the Army, Navy and Royal Air Force, placed their tributes.

Earl of Wessex takes salute of the march past

The actual service was led by the Bishop of London and featured a march past by some 10,000 Royal British Legion veterans, representing 300 different Armed Forces and organisations between them. Among those marching was a 100-year-old Second World War veteran and those who served in recent conflicts including in Afghanistan and commemorating the 40th anniversary of the Falklands War, members of the South Atlantic Medal Association also took part.

The Earl of Wessex took the Salute on Horse Guards Parade.

The Prime Minister Rishi Sunak said prior to the service: “This year more than ever, we are reminded of the huge debt of gratitude we owe those who lay down their lives to protect their country.” He also paid tribute to the brave soldiers of Ukraine as they continue their own fight for freedom.

Festival of Remembrance an emotional occasion

The night before there was the annual Festival of Remembrance at the Royal Albert Hall, in London attended by members of the Royal Family, including King Charles III, Princess Anne, and Prince Edward, and they watched no doubt with great pride and emotion as a video of their late mother was played with many tributes made to Queen Elizabeth II, who always considered Remembrance Sunday as one of the most important engagements in her calendar.

Also in attendance were Camilla, the Queen Consort, the Prince and Princess of Wales, the Countess of Wessex, Vice Admiral Sir Tim Laurence, the Duke and Duchess of Gloucester, the Duke of Kent and Princess Alexandra.

The remembrance book, which contains the names of British war dead was brought into the venue by among others, Captain Dmytro Donskoi, the Defence and Air Atache for Ukraine. The festival concluded with a rendition of God Save The King followed by three cheers, after which the King waved to the crowd who applauded warmly, displaying great affection for all of the Royals as the left the venue.

What is the Cenotaph?

The Cenotaph was built as a memorial following the conclusion of the First World War to honour the 880,000 British soldiers who lost their lives and it came to be seen as a way of having a focal point for remembering those who had died on the Western Front.

The impressive 15ft stone structure, which is protected as Grade I listed, was designed by Sir Edwin Lutyens to look like a coffin on top of a plinth, and was erected in 1920. On the sides is the inscription “The Glorious Dead” in capital letters, with the only other writing being the dates of the world wars in Roman numerals.

The word cenotaph is derived from Greek, meaning “empty tomb”.