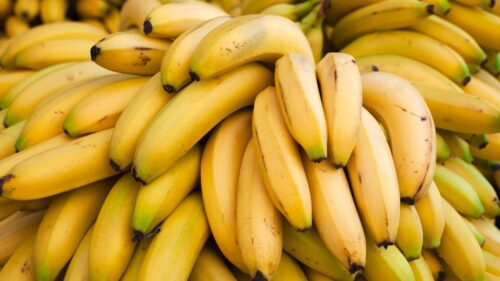 Trade with the United Kingdom was suspended earlier this month and Prospere, during which time he dismissed suggestions that the Phillip Pierre administration had been responsible for the killing of the industry.

“But they never said the important part of my statement, which was as soon as this decision was taken, the very same quantity of bananas was diverted to Trinidad and Tobago,” Prospere said, adding that the UK trade suspension did not negatively impact local farmers.

“We are still exporting those 1,000 boxes to Trinidad,” Prospere said, adding that the local authorities are working with a supplier in Trinidad & Tobago to ship 3,000 additional boxes of local bananas to the twin-Island Republic,” he told reporters.

Prospere refused to take responsibility for the crash of the sector, saying that his government met it already on the brink of collapse.

“Banana trade with the UK was halted for two years.  The critical infrastructure required to efficiently operate the industry was dismantled. The main banana exporting company WIBDECO/Winfresh ltd went into administration,” according to him.

Furthermore, he said Prospere said that key assets such as the ripening facility at Stanstead in the UK and Winfresh’s stake in the Geest shipping line were sold off to third parties to meet debt payments.

“The local producer base/farmer’s organization, the NFTO was facing financial losses and technical challenges. They had to immediately assume responsibility for the commercial arm of the trade although they did not have the resources and expertise to adequately perform that role. The situation at the time seems rather bleak. In the national interest, we saw it prudent to inject the necessary financial and technical support required to recommence trade with the UK supermarkets,” he added

He said in May this year, a technical delegation from the UK, visited St Lucia to determine the state of readiness prior to the commencement of trade.

And…the technical field visit was deemed satisfactory and trade with the UK commenced immediately on May 15.