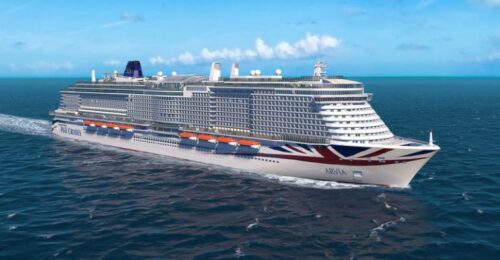 Senior representatives of Carnival UK met with tourism officials and Prime Minister Gaston Browne on Tuesday to discuss homeporting in Antigua and Barbuda and other aspects of the industry.

The country is preparing to welcome Carnival Arvia-the biggest ship to port in Antigua.

“This will be a first for us it is something that we are preparing for. It will be on the 28th of January. Antigua will be looking to offer LNG. we are one of the only islands at this point within the Caribbean that can offer LNG. As you know, Arvia is the newest ship for the line, and going forward all cruise lines or cruise ships will have to switch to LNG, I think by 2025,” he said.

He said discussions were also centered around what is called shore power.

“In other words, while they are here, they can turn off their engines to save again and the whole aspect of the environment. And if we’re positioned to offer them shore power to operate the ship while it’s here, they’re going to be staying until at least 10 p.m. So, there would be an opportunity for their passengers to move around heritage key and St John’s,” Fernandez added.

He said initially, the kickstart the venture, 1000 passengers are coming into Antigua by charter, using the old terminal which was refurbished.

“And the whole aim is to position ourselves to have even more passengers joining us here in Antigua. At present, Barbados I think is between seven and 8000. We aim to move it up and bump it up. And to have other cruise lines also do the home port,” he added.

The executives also wanted information on things like excursions and other projects.

“They wanted to have an update on what excursion is available. They also wanted to know what’s the update in terms of the Fort James project. They also wanted to know, what is happening with the whole aspect of the GPH. We needed to assure them that we are committed to going forward with them. they have initially four homeporting operations planned between January and April. So, once we do very well with that, I think, come next season, we can expect to do even better in terms of the whole aspect of it,” he explained.