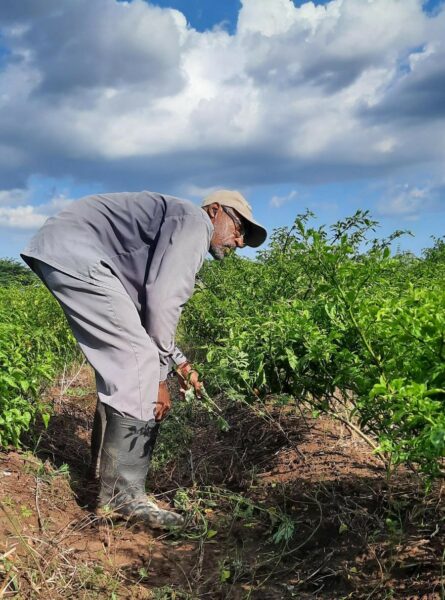 As the intensifying impacts of climate change continue to threaten water and food security in Jamaica, the Food and Agriculture Organisation of the United Nations (FAO) together with the Government of Mexico and the Government of Jamaica are taking steps to ensure farmers have the tools and expertise to be climate- resilient.

As part of the ‘Addressing the Water-Energy Nexus in Agriculture’ sub-project of the Mexico-CARICOM-FAO Initiative “Cooperation for Climate Change Adaptation and Resilience in the Caribbean” or the Resilient Caribbean Initiative, in short, 5 farmers at the Amity Hall Agro Park in St. Catherine, Jamaica, will receive a number of climate-smart resources including solar powered pumping systems, open-field irrigation systems (drip irrigation), hydroponic production systems and rainwater harvesting and storage facilities.

Chief Technical Director of Special Projects at the Ministry of Agriculture and Project Focal Point for Jamaica Courtney Cole indicated “The provision of these climate-smart resources will strengthen resilience through better water management and allow for utilization of cleaner and greener sources of energy.  Though water and energy do not end to themselves, the availability of these inputs on a sustained and equitable basis is key to successful smallholder cultivation, improvement in yield, and income for the farm family as well as providing the motivational boost necessary for women and youths to enter into agriculture and fisheries production space.”

Mr. Cole further stated, “The impact of renewable sources of energy, as well as the harvesting of water, can only redound to the benefit of community economics as well as the accumulated effect on growing the country’s GDP.”

The effects of climate change are now evident, the sea level is rising and rainfall patterns are changing, which decreases the freshwater quality and increases the frequency and severity of droughts. This, coupled with inefficiencies in the use of water, particularly affects agricultural production, which is in strong competition with other sectors for water resources.

The Resilient Caribbean Initiative funded by the Mexican Agency for International Development Cooperation (AMEXCID) and implemented by FAO supports Caribbean Small Island Developing States (SIDS) using an integrated Water-Energy-Food nexus approach in Barbados, Antigua and Barbuda, Jamaica and Saint Kitts and Nevis. It promotes technological innovations, such as solar-powered (micro) irrigation systems to improve water efficiency and management (e.g. hydroponics and rainwater harvesting), and access to clean and renewable energy (solar and wind), to increase agricultural productivity and efficiency in water use.

FAO National Project Coordinator Princess Lee indicates, “The water and irrigation system are the lifeblood of agricultural production and productivity. However, a well-structured water pumping and distribution through the irrigation system requires a reliable and consistent energy source. Solar irrigation system marks the major shift from fossil fuel-based technology to cleaner and greener energy in agriculture. Solar radiation is the most abundant source of energy in the world. The solar-based irrigation system has emerged as the most suitable alternative for the farmers facing energy crises around the world.”

In promoting climate resilience and awareness of climate-smart technologies in agriculture, the project has also supported several capacity-building activities, commencing a series of training in July 2022 for government partners on areas such as validation of rainwater harvesting and water-intake sites as part of a decision-making tool, which will help Government staff to better plan infrastructure interventions. Training for farmers on hydroponics production and water conversation strategies are set to commence in the coming weeks with the support from Jamaica’s Rural Agricultural Development Authority (RADA).